I’d seen the stunning Comma butterfly (Polygonia c-album) before, when I lived in Cheshire for 6 months, but this was my first in Wales and the first for 2016. And, surprisingly for a butterfly that can be quite skittish, it was very amenable to photography, fluttering off and coming back to a nearby leaf and changing its pose so I could get a variety of shots – a born model!

Named for the small white comma-shaped mark on the underside of its wings, the Comma is a resilient species. The main food plant for its caterpillars used to be the hops used in brewing beer so the butterfly’s numbers dwindled perilously when hop farming declined in the 1800s. For some reason, the Comma has changed its larval food plant to the Common nettle so, since the 1960s, both its numbers and the extent of its range have increased dramatically. It’s a born survivor! 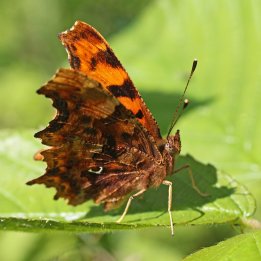 You can just see the little white comma on the underwide of the wing in the photo above left. On the right is the pupa – a beautifully textured structure, with small silver highlights. And below is a rather battered-looking older specimen, seen when I lived in Cheshire. 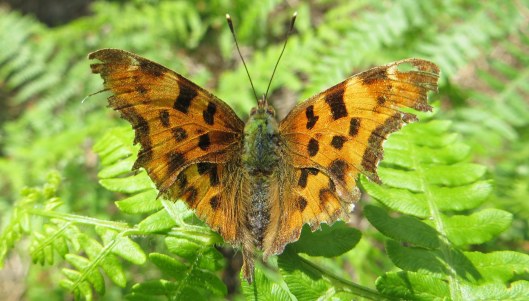