On Sunday the Mary Gillham Archive Project teamed up with the Cardiff Naturalists’ Society to replicate a walk that Mary Gillham had participated in many moons ago, looking for aliens in Cardiff. Of course, I don’t mean the little-green-man type of alien – these were alien plants, though the definition of alien in this case seemed quite diverse. They may have been non-native plants that had arrived in Cardiff in the sand that served as ballast in the days of sailing ships, like Canadian Fleabane (Conyza canadensis). 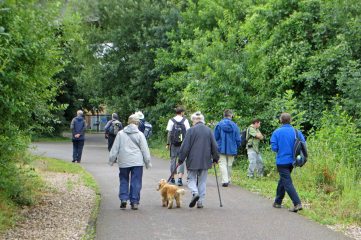 They may arrived in shipments of imported grain or bird seed or perhaps in bales of wool, like Hoary mustard (Hirschfeldia incana) and White mignonette (Reseda alba). Or they may have initially been decorative plants, like the Large-flowered evening primrose (Oenothera glazoviana) that was introduced from North America in the early 17th century and has since become naturalised.

As well as those plants named above, we also saw the following aliens: Small-flowered evening primrose (Oenothera cambrica) (introduced to cultivation in Britain in 1775); Himalayan blackberry (Rubus armeniacus) (a garden escapee); French bartsia (Odontites jaubertianus) (mode of introduction unknown); Wild radish (Raphanus raphanistrum subsp. raphanistrum) (presumed to have spread as a weed of cultivation); Fennel (Foeniculum vulgare) (probably introduced by the Romans); Tansy (Tanacetum vulgare) (an escapee from cultivation); and, of course, the notorious Himalayan balsam (Impatiens glandulifera) (introduced as an ornamental garden plant in 1839).

The aliens are among us and they’re thriving! 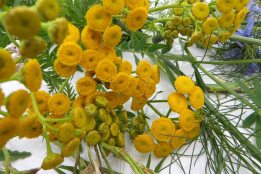 Much of the information about the origins of these plants came from the Online Atlas of the British and Irish Flora.

4 thoughts on “Aliens in a Cardiff park”