In yesterday’s blog I mentioned my confusion in identifying the Brown argus butterfly. Here’s why, plus some tips on how to defuse that confusion.

One of these butterflies is a Brown argus (Aricia agestis), the other five are female Common blues (Polyommatus icarus). Can you spot the odd one out? 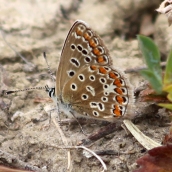 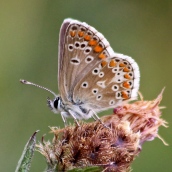 If you have keen eyes, you will have noticed a difference in the patterns of spots of the butterfly in the last photo, which is the Brown argus. The Common blues all have an extra spot on their forewings (below right) and, on their hind wings, the two spots on the leading edge are more spaced out than those of the Brown argus – its two spots have been described as being close to a ‘figure of eight’ shape (below left).

Now, let’s look at the open wing patterns, which I find even trickier. Two of these butterflies are Brown argus, four are Common blue females. Which are which? 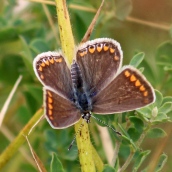 Firstly, as you can no doubt see, the amount of blue on Common blue females is very variable and that alone cannot help you identify them, as the Brown argus can also have a slight blue sheen to its wings sometimes. What I have found is that there is much less, sometimes no white colouration below the orange markings on the lower wings of the Brown argus (below left) and, though the Common blue can show a slight dark spot in the middle of its forewings (below right), that spot is much less obvious than the Brown argus’s spot.

So, did you work out which was which in the open wing photos? The middle butterfly in each row (photos two and five) are the Brown argus butterflies. Top marks if you spotted them!

4 thoughts on “Flying on the wings of confusion”