I try to time my walks at Sully with a mid-morning high tide – that way I don’t have to get up too early for the bus and I miss the early morning dog walkers. Yesterday was one such day and, though there was a cool wind blowing, it was a lovely day for a long walk. At first, I just sat and scanned the beach and the shoreline and the sea. 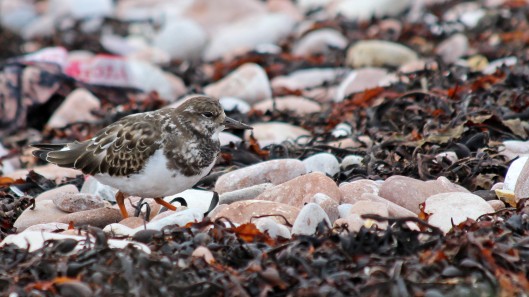 Several Turnstones were browsing the big deposit of seaweed the tide had rolled in and then this Dunlin flew in to join them. 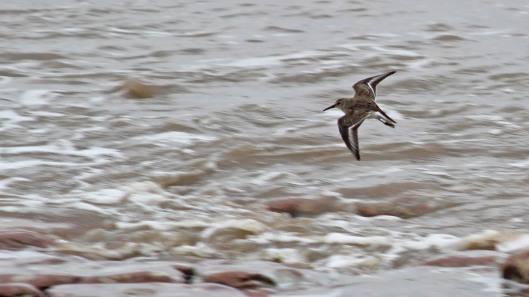 With my bins I followed it in and saw it plop down to join a small number of Ringed plovers by the water’s edge. To me, their dark eye masks make Ringed plovers look like bandits, though very tiny and very cute bandits to be sure. 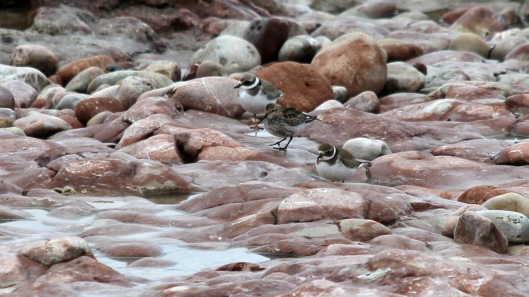 One of the banditos only had one leg but it seemed to be managing to hop along okay. That made me think of Hop-along Cassidy but I was mixing up my masked men – the Lone Ranger was the one who wore the mask and, of course, he was no bandit.

At that point a dog and its owner came tootling along the beach, which put all the birds up … and I realised there were, in fact, two Dunlins (the two lower birds in the centre of this photo).

I took this opportunity to walk further along the beach and found myself a spot on the stone wall edging a slipway, a location where my birding friend Ceri said he’d seen a large number of waders the previous day. I hadn’t been sitting there long when a Wheatear flew right over my head and on to a boulder about 10 metres in front of me. I’m not sure who got the biggest surprise!

A large group of waders flew across from Sully Island and landed on rocks near the water. They were a bit far away to see clearly but most seemed to be Ringed plovers, a group of perhaps 30.

People walking along the coastal path above me scared my little Wheatear friend away but then I realised there were actually two birds flitting along the rocks and scrub.

They’re such lovely little birds and this one managed to catch itself a snack, which reminded me that it was almost lunchtime, time for me to be moving along on my walk. More tomorrow … 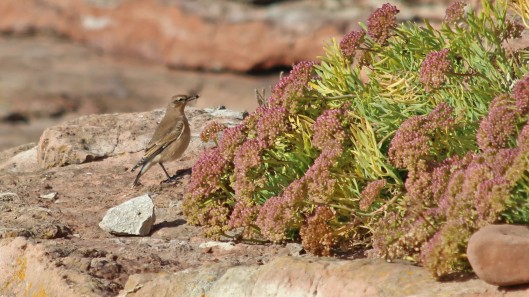