Discos seem appropriate for a Friday night or, rather, they would have in the 1960s and ’70s. But my discos don’t involve a multi-colour dance floor or a flashing-ball light or John Travolta-style dancing – my discos are fungi. Getting down and dirty in Cogan Wood earlier this week, selectively picking up small logs of rotting wood for inspection, I found two of these little beauties. 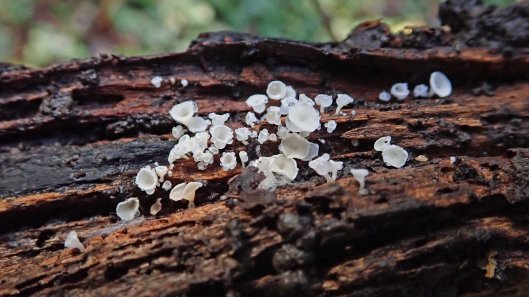 Disclaimer: Fungi are notoriously difficult to identify and one thing I’ve learnt from dipping my toes into the mycological world is that one should always confirm one’s identification, especially of minute fungi like these, by microscopic examination. I have not done that so my IDs are not confirmed, just quite likely.

This Garden spider (Araneus diadematus) was doing a spot of web maintenance as I passed by and I – rather fancifully, I admit – thought it looked just like it was playing a game of peek-a-boo.

As I look around me on my daily walks, I see dying leaves falling from skeletal trees, I note that the butterflies and most other insects have now disappeared, I watch the winter bird migrants munching on the final berries, and I notice how short the hours of daylight are becoming. Yet, in the midst of all this death, decay and gloominess, I am cheered to notice signs of life and renewal. It seems awfully early for Pussy willow – maybe it’s not that. Whatever it is, it’s lovely.

Cosmeston was relatively quiet yesterday. A few Redwings flashed their rusty flanks at me, indignant that I had interrupted their grazing in the west paddock, and a pair of Mistle thrushes screeched their football-rattle call from the tree tops as the Redwings flew up to join them. Carrion crows and Grey squirrels hovered on the periphery, watching as I fed seed to a posse of passerines in Cogan Wood, but the hoped-for Marsh tit did not appear. So, I abandoned the birds, headed up and along the muddy woodland tracks where few people venture, eyes down and searching for fungi. Within minutes, my hand was scratched from reaching too carelessly through brambles, my fingers were filthy from picking up rotting wood to examine more closely, my camera was speckled with dirt from being plonked on the ground for better close-ups, but my reward was this most wonderful slime mould. I don’t know its name but I am a huge admirer of these enigmatic organisms, and this one was a beauty! 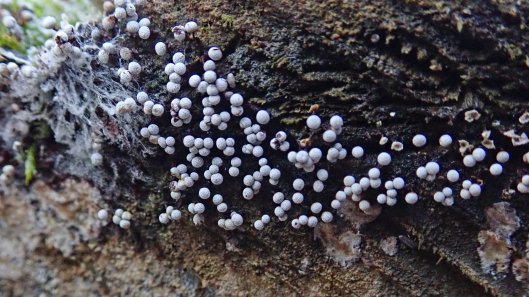 Brain child of one of Britain’s leading tree charities the Tree Council, National Tree Week is an annual celebration of trees and their importance to the wellbeing of everything and everyone on planet Earth. Events are held throughout Britain, with an estimated 250,000 people getting digging and dirty to plant trees. You can find out more on the Tree Council’s website. 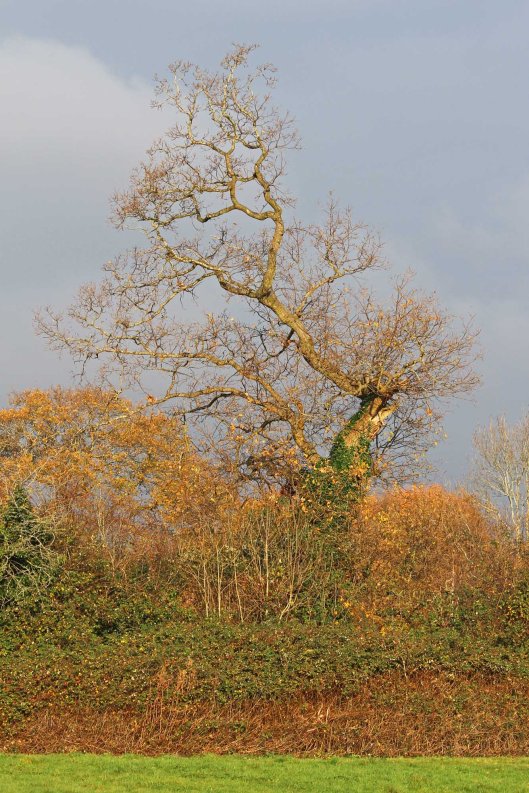 If you’ve been following for a while, you’ll know I’ve been trying on and off to learn the names of, and a bit more about, the British wildflowers I find on my meanderings. And, to that end, I follow a weekly happening on Twitter called #wildflowerhour. You can read more about that in my previous blog here. During winter they run a challenge to find and name at least 10 wildflowers each week and share them on social media using the hashtag #winter10. 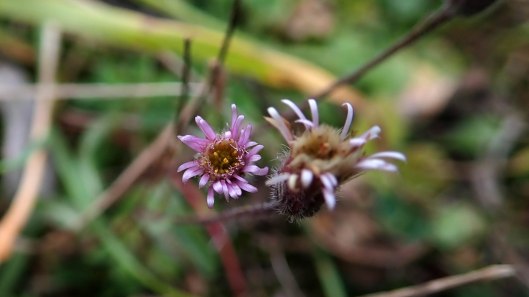 Earlier this week, I decided to see what I could find as I walked firstly through Lavernock Nature Reserve and then homeward through Cosmeston Lakes Country Park. And, er, actually, for this week my hashtag needs to be #winter11. These are they: Blue fleabane, Bramble species, maybe a Hawkbit species, some kind of Buttercup, a Dandelion species, a Daisy and Devil’s-bit scabious, Yellow-wort, a thistley thing and Red clover, and Common ragwort. You can see I’ve still got some learning to do! 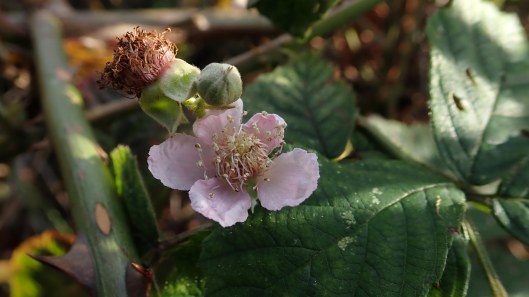 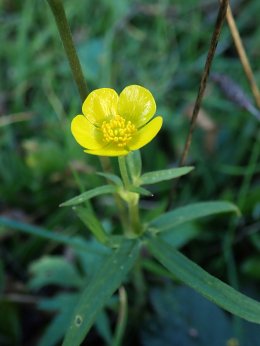 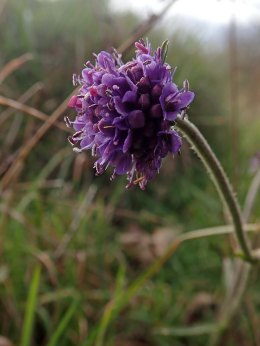 On Thursday, at long last, I saw and got photos of my bogey bird – not great photos, because it didn’t stop still for a single moment and was mostly obscured as it poked and prodded its way along the shrubby water’s edge at Cardiff Bay Wetlands Reserve – but I’m still absolutely delighted to have seen the bird. 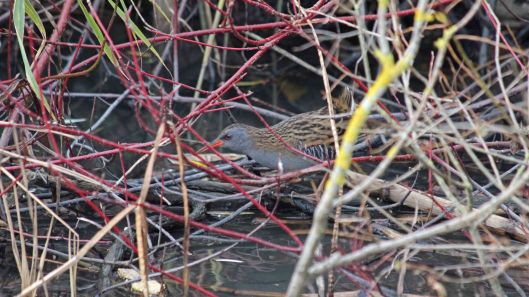 Though I’ve heard these birds in various locations, I’ve only ever seen a Water rail (Rallus aquaticus) once previously, at Forest Farm Nature Reserve, back in February 2016. At the time, I didn’t realise how lucky I was to have good views of it as it did a circuit of the pond in front of one of the hides. Now I know better.

My failure to see a Water rail during the intervening 2 years 9 months was not simply down to bad luck or bad field craft. These are notoriously secretive birds, seemingly relishing concealment and a quiet life in the very thickest of wetland vegetation, though quiet they are not. 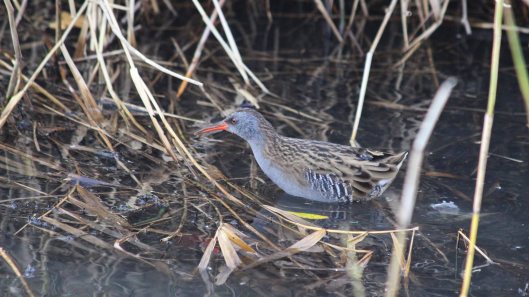 Various adjectives have been used to describe their call: squealing, grunting, snorting, piglet-like. (You can listen for yourself here.) Though it was constantly chattering away to itself, this particular Water rail made none of those more raucous sounds: its one-sided conversation was more of a sharp-voiced running commentary on the chilliness of the weather, the lack of insects, the number of pesky mallards.

This Water rail was smaller than I remembered, about half the size of the more numerous and extrovert Moorhen, and, to my eye, it was much more handsome. Its head, chest and underbelly have the rich blues of the Moorhen but its brown-and-black back is mallard-like, and it has a lovely blue-and-white stripey area on each flank. The cheeky white bobbing under-tail  is the same as its bigger cousin though. 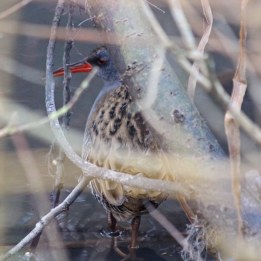 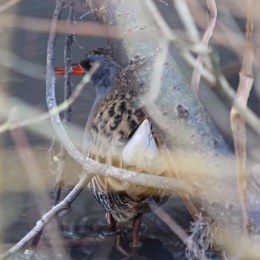 Happy #FungiFriday! I actually found these little oysterling fungi a few weeks ago but forgot to share them at the time.

Crepidotus calolepis is a bit of a mouthful but these little beauties don’t have a common name. Here’s what fungi expert Pat O’Reilly says about its scientific name:

The generic name Crepidotus comes from crepid- meaning a base such as a shoe or a slipper (although some sources state that it means ‘cracked’), and otus, meaning an ear – hence it suggests a ‘slipper-like ear’. In the past mushrooms in this genus were sometimes referred to as slipper mushrooms. The specific epithet calolepis may come from the roots calo- meaning beautiful and lepis, meaning with scales. 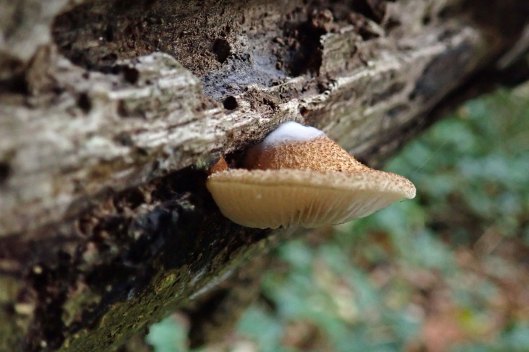 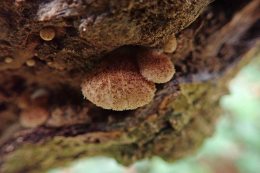 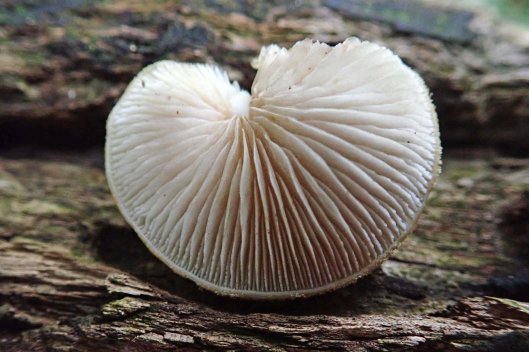 O’Reilly is doubtful about the presence of Crepidotus calolepis in Britain, suggesting that the British records are, in fact, scaly forms of Crepidotus mollis, the Peeling oysterling, but my find was confirmed from photos by two other British experts so C. calolepis it is! 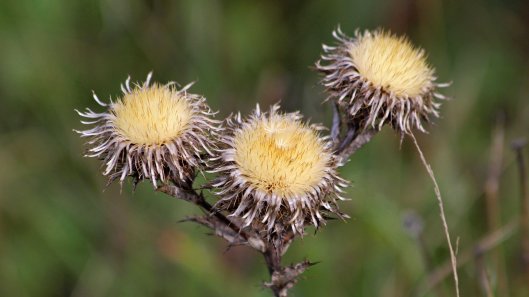 They glisten silver and gold in the late autumn sunshine these Carline thistles, with their thick fringe of papery bracts and heads of soft golden down. I blogged about the flowers last year; now here are the ‘everlasting’ seed heads that can be seen all through the chilly months of winter.

Have I gone from the sublime (yesterday’s Hen harrier) to the ridiculous (today’s Canada geese)? Maybe. But to me all birds are interesting so geese today it is! 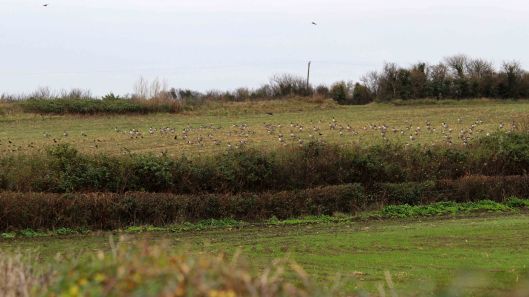 With their constant honking conversation, I could hear these birds before I saw them, sitting, standing, arguing with their neighbours, walking about, feeding on excess seeds from the farmer’s recent planting. 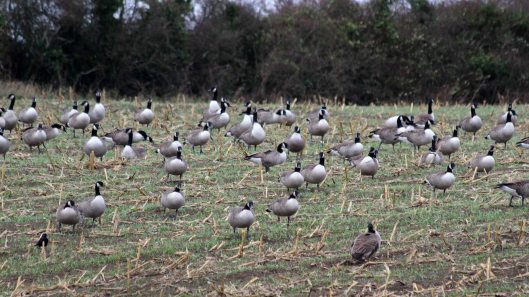 A local birder recently reported 280 Canada geese on the lakes at Cosmeston, which is just a short distance as the goose flies from where these birds were resting at Lavernock, and by my reckoning there were over 200 in this field yesterday.

I have walked this way on two consecutive mornings this week and have seen the geese both times but, even as I watched them, I doubted that the farmer would let them stay much longer.

As I was leaving the area yesterday, I heard shooting, saw geese flying off in small groups and also saw large flocks of Woodpigeons and Jackdaws take to the air, so I assume the farmer is now actively chasing all potential seed-eaters off his fields.