I am the bearer of sad tidings today. All three of the Lesser black-backed gull chicks, who were living amongst the chimney pots across the back lane, have perished. I think one died a week or so ago, probably because it was the runt of the brood and was out-competed for food by its two older siblings. I’m not sure what happened to the other two – one was definitely much larger and more dominant than the other, so perhaps the smaller of the remaining two also died from starvation. I noticed the third chick had disappeared late yesterday afternoon, when I spotted a couple of the local Jackdaws inspecting the nest site – I don’t think they would’ve killed the chick, as it was bigger than them, and they seemed merely to be picking through the nest materials.

The female Lesser black-backed soon chased them off and has spent quite a bit of time sitting on the chimney pots, peering at the nest as if looking for the chick(s). She has also been staying nearby, as if she expects them to reappear and she’s been calling for them, which has been very sad to hear. 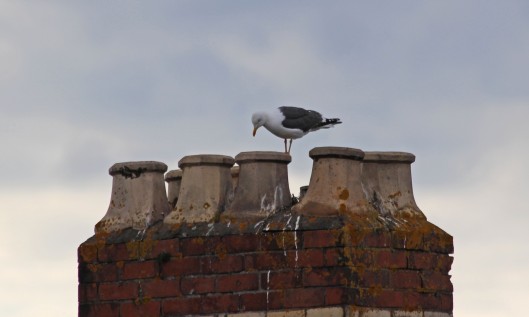 There have been many other gulls in the area, some of whom have been taking an interest in the nest. Several times I’ve heard lots of screeching and watched while the parents chased off the interlopers. I presume that, while the parents were out looking for food, either those gulls or some other predator has carried off the remaining two chicks. ‘Tis the sad reality of the natural world.