Holly flowers are tiny, tucked away in the crooks of branches, inconspicuous behind the mass of glossy evergreen leaves. And that’s my excuse for not having noticed them until quite recently.

I’ve since read that Holly (Ilex aquifolium) is dioecious, which, if you’ve been following this blog for a while, you might remember from my March 2020 post, Wild word : dioecious, means that Holly’s male and female flowers occur on separate trees. I think the flowers I found are male, as the female flowers have small green spheres in their centres, which, if pollinated, would grow in to the red berries we all associate with the Holly tree. 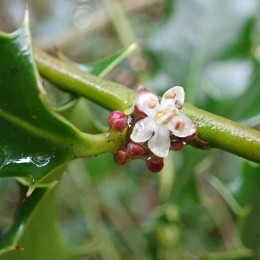