In my homeland, New Zealand, they are probably the most common and well known bird, though the New Zealand sparrow is not a native – it was introduced there several times between 1866 and 1871, and has clearly made itself at home. Sparrows were also familiar birds during the time I lived in Peru and in Cambodia but, here in Wales, I seldom see them, because, in recent years, the humble house sparrow (Passer domesticus domesticus) has undergone a huge decline in Britain. And I do mean huge – the British Trust for Ornithology website reports that the population has declined by 71% since 1977, possibly due to loss of habitat but also to a decline in the insects adult birds feed their young. The house sparrow is now on Britain’s red list, as a bird of the highest conservation concern. 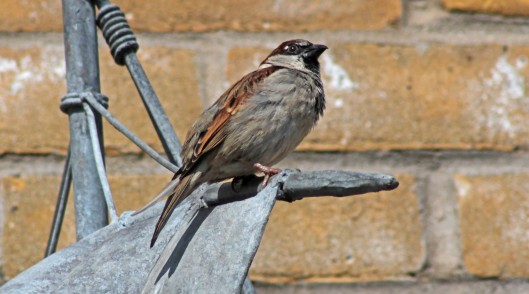 Around the world there are 26 species of house sparrow, native to Europe, Asia and north-west Africa. There are also American sparrows (from a separate family, the Emberizidae) and birds with similar names, like the Java sparrow (also a different family, the Estrildidae). Still, the world would be much the poorer if it lost the lovely British house sparrow, so it is gratifying to know that various wildlife organisations are working to improve its situation and increase its population. Today, let’s celebrate the humble sparrow!

a sparrow in Cambodia

left, a sparrow in Tanzania (far too busy gathering nest materials to pose for a photo), and, right, a rufous-collared sparrow in Peru