For a relatively non-descript small brown bird the Rock pipit’s alternative names are anything but ordinary. Its Latin name is Anthus petrosus, which sounds for all the world like an incantation Harry Potter might utter against some evil force that was assailing him, and it has a wealth of interesting vernacular names that include dusky lark – understandable; gutter teetan – most peculiar; rock lintie – from Aberdeenshire; from east Yorkshire, sea lark; another from Scotland, sea lintie – is lintie the Scots for linnet perhaps; tangle sparrow, from Orkney and Shetland, as well as teetan and teetuck, also from Shetland. 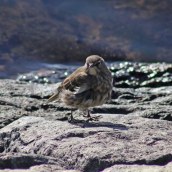 I see these little birds quite often on the south Wales coast, on the rocks and stone embankments of Cardiff Bay and the rivers that flow into it, and on the sloping stone walls of other dockland areas, like Barry docks. When they’re not perching watchfully on a prominent rock, they’re fossicking busily between the stones for insects and seeds, beetles and, if they’re lucky, small fish.