Back in November, I thought I’d found my first Yellow-legged gull (Larus michahellis) – and it still might have been – though I’m really not convinced about it. But, this gull, the one pictured here, is absolutely, one-hundred-percent definitely a Yellow-legged gull … even though its legs are not yellow. Have I not written previously that gulls are tricksy?!

As you might guess from looking at it, this is not an adult gull. I’m reliably informed, by the expert birding friend who identified it for me, that this gull is in its second winter. My bird guide book tells me these gulls take four years to reach adult plumage so it’s half way there. Its age is the reason its legs are not yet yellow. 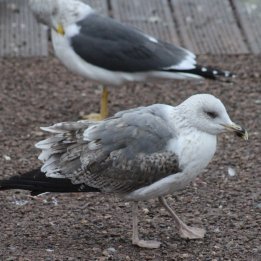 One of the main keys to its identification is the colour of the feathers on its back: Yellow-legged gulls are about mid way between the light grey of Herring gulls and the darker grey of Lesser black-backeds. The two photos above show my Yellow-legged gull, on the left, and, on the right, a Herring gull of the same age. I can see the difference in the feather colour and, to my eye, the shape of the head and bill look slightly different but I’m not sure I’d be confident of IDing one of these gulls without expert help.