If I hadn’t decided to keep the title of my 2018 tree-following blogs fairly simple, I would probably have titled this post ‘The mysterious case of the tree with the confused identity’!

The tag on the tree, which is growing in Cardiff’s Bute Park, names it Mono maple (Acer mono). That seems fairly straight forward but, when I checked it on the Cardiff Parks website, I found it labelled Painted maple (with Mono as an alternative) and its scientific name listed as Acer pictum. So then I looked the tree up in the Cardiff Council Horticultural Database, where its common name is given as Korean maple and its scientific name as Acer pictum (a.k.a. Acer mono). So then I went to The Plant List, which is meant to be the definitive list: there I was informed that Acer pictum is the accepted name and Acer mono is a synonym.

And then, after a bit more searching, I found an extremely helpful blog post from the JC Raulston Arboretum at North Carolina State University, where they use the common name Painted maple and explain its scientific name as follows:

It was first described in western literature by the Swedish botanist Karl von Thunberg in 1784 but was widely known as Acer mono after it was introduced to the west in the 1880s. Its name continues to cause confusion with some authorities using A. pictum to cover the entire species while other botanists break it down into several subspecies including A. pictum subsp. mono. 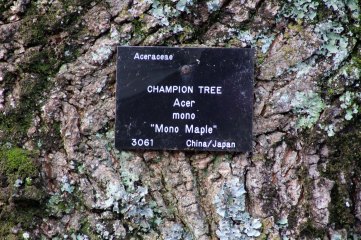 And, in response to a question from a reader:

… many taxonomists disagree on the name of this maple. According to van Gelderen, they should all be Acer mono since he contends that Acer pictum is an invalid name. In any case, there is much disagreement over whether they constitute different varieties or subspecies or are just part of a large very variable species. A. p. subsp. pictum has short hairs on the back side of the leaf, while A. p. subsp. mono has no hairs on the abaxial surface.

As even the experts can’t agree, for the twelve months that I will be following this magnificent tree, I am simple going to call it Mono. More next month …

Why not join the tree following community. You can find out more here.