Officially Mergus merganser – the name merganser is a hybrid eighteenth-century word obtained from the Latin root merg-, meaning ‘diving’, and anser, meaning ‘goose’, this beautiful bird is the Goosander. It used to be known as the Common merganser, and I’ve noticed some birders still call it that – old habits…. The bird has a ton of other vernacular names, like, from Sussex, dun diver; green-headed goosander, harle, and jacksaw, in Yorkshire; land cormorant (in Dublin); in Shropshire, pied wigeon; and, in Orkney, rantock. And then there are the understandable references to that long serrated ‘all the better to catch fish with’ bill: sawbill, in Stirlingshire; sawneb, from Aberdeenshire; and, from Suffolk, sawyer. 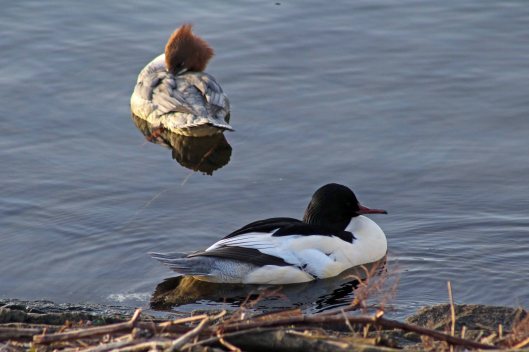 Female above, male below

Their fish-catching habit is why Goosanders have often been persecuted, particularly by the fishermen who think the birds are theirs for the catching. Fortunately, the bird’s population has, thus far, not suffered unduly from this persecution and, from 1871, the year they were first known to have bred in Britain, the Goosander has gradually colonised most of Scotland and spread through much of England and Wales.

Britain has another merganser, Mergus serrator, the Red-breasted merganser, and the two species can be hard to tell apart. But the main thing to note is location – Goosanders are mostly freshwater birds and can be seen year round on rivers and lakes in many parts of Britain, whereas Red-breasted mergansers, although equally at home in fresh- and salt-water locations, are mostly seen in the winter months in coastal areas. 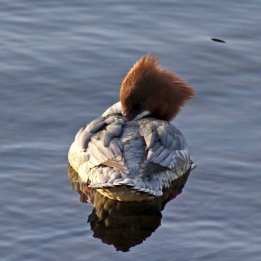