‘Nearly always associated with dead oak trees, this easily-overlooked crust fungus varies considerably in its appearance, sometimes mainly resupinate beneath fallen logs but usually in bracket form when on dead stumps,’ writes Pat O’Reilly on his First Nature website. The specimens of Oak curtain crust fungi I found yesterday, in Cardiff’s Grangemoor Park, were definitely growing on oak but, in this case, they were on thick, solid oak logs that have been used to construct benches and signposts.

I always enjoy reading the etymology entries on O’Reilly’s website. Oak curtain crust’s binomial name is Hymenochaete rubiginosa, which is explained as follows:

Hymenochaete, the genus name, comes from hymen – a prefix referring to the fertile membrane (the crust surface), and -chaete perhaps from the Greek noun chaite meaning long hair and perhaps referring to the fine hairs (settae) on the upper surfaces of fungi in this generic group.
The specific epithet rubiginosa means rusty and refers to the reddish-brown colour of the hymenial (fertile) surface of this crust fungus. 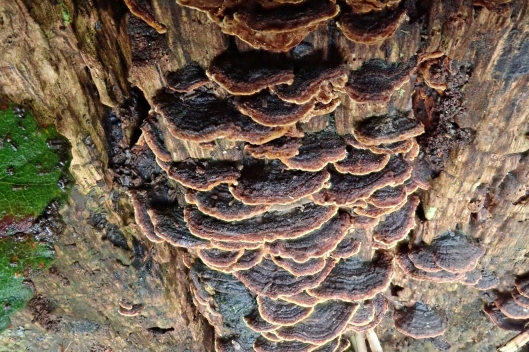