You’d think in a contest between a Crow and a Raven, the Raven would win hands down every time. After all, it’s Britain’s biggest corvid, a hulking beast of a bird. And I’m sure if this had been a real contest, the Raven would have won – but it was not.

As you can see, the Raven was sitting on a rooftop aerial, on a house in a lane not far from my house, not somewhere I’ve seen one before. The Crow had taken exception to the Raven being in its territory, so was harassing it repeatedly. The Raven ignored the Crow for a while but then, I think, simple got fed up, and flew off.

The Starlings were spectators, watching with interest from a neighbouring aerial. It was a charming little interlude on my daily walk. 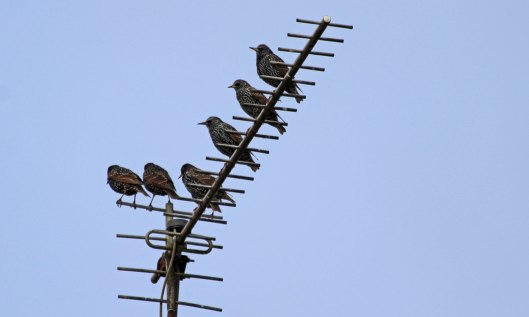