This Long-tailed duck (Clangula hyemalis) was first spotted in Cardiff Bay by a local birder on 19 December, so I walked that way the following day but only managed very distant views of it as a black-and-white dot feeding far out in the Bay.

Luckily for me, though the duck wasn’t seen for several days, it appears to have lingered unseen, perhaps amongst the reed beds, until it was re-found on 27 December. So, on the 29th’s walk, I went looking once again and struck it lucky, as the bird was with the large Tufted duck flock in the Cardiff Bay Wetlands Reserve.

Initially, it was very distant but then it suddenly decided to fly over very close to where I was standing on the viewing platform. Almost as if it had ‘ants in its pants’ or was being nibbled from below, it acted very unsettled, flying back and forth a few times, before disappearing out beyond the moored boats, into the River Taff. What a treat it was to have such close views of this charming little winter visitor. 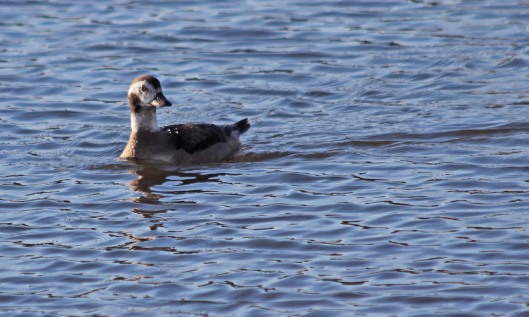