Much to my surprise and joy, one of the Water rails came out to play at Cardiff Bay Wetlands Reserve yesterday. Often skulking, more often heard than seen, Water rails are beautiful birds when you do get to see them. I recently learnt that their call, which some describe as resembling a screaming pig, is known as sharming, which apparently comes from ‘a now obsolete dialect word meaning “to scream shrilly and vociferously”’ (per Brett Westwood & Stephen Moss’s bestseller Wonderland: A Year of Britain’s Wildlife Day by Day). So, the Water rail, both sharming and charming! 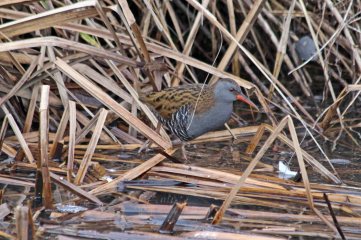