Yesterday the whole area was shrouded in heavy, freezing fog and, as my flat is only about one kilometre from the water, as the seagull flies, I could hear the fog horns blasting all day. It may have been cold but it was actually quite wonderful and brought back happy memories of my years living near the harbour in Auckland, New Zealand, when I would also hear the horns on foggy wintery days. I was stuck indoors waiting on a delivery most of the day but, when that finally came late afternoon, I headed out for a quick wander. As I stood in the centre of this field, on the clifftops, the fog swirled eerily back and forth, sometimes blotting out this lone tree and the houses beyond, sometimes almost clearing. The fog was like a living entity dancing around me – it was just magical! I’m already looking forward to the next fog to come rolling in from the ocean. 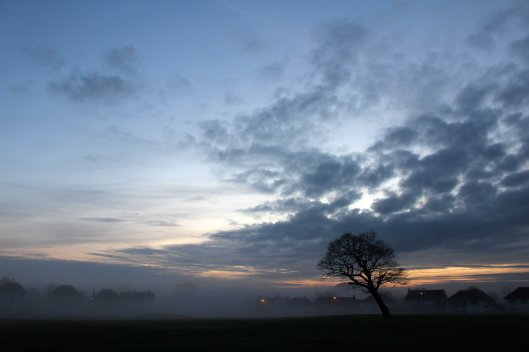