The Dunlin (Calidris alpina) is probably the British wader most people have seen – even if they didn’t realise what it was. With 9,600 breeding pairs and 350,000 Dunlin over-wintering in Britain, it’s certainly the most common. 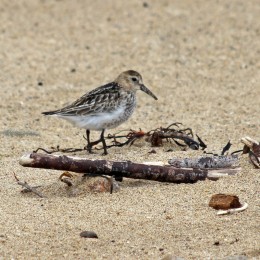 And because it’s so common, it’s been given a huge number of common names by the folks that live in different parts of these isles. Some of my favourites are: sand mouse (Westmorland), peewee (Northamptonshire), pickerel (Scotland), bundie (Orkney), and sea lark, from several different locations.

Yesterday I told you about my chilly but super exciting birdwatching morning on Saturday and showcased two of the highlights, the Whimbrel and the Bar-tailed Godwit. Today, we have the Sanderlings and the Dunlins, both so well camouflaged against the stones on the seashore that, if they hadn’t been almost constantly moving about in their search for insects, they would’ve been very hard to spot.

Sanderlings to the left, Turnstones to the right

Like yesterday’s birds, the Sanderling (Calidris alba) is a passage migrant, seen in parts of coastal Britain during the spring as it heads to its breeding grounds in the Arctic and in the autumn as it heads south to tropical beaches around the world, a journey that can be as long as 6000 miles. During the breeding season, the birds’ grey plumage takes on a much redder hue on the head, neck and back, which you can clearly see on one of these birds (particularly in the photo top left).

The Dunlin (Calidris alpina) – like the Sanderling, a member of the Sandpiper family – is a very common sight on Britain’s coast throughout the year, though breeding birds head to the upland areas of Wales, Scotland and England to nest between April and July. The Dunlin also becomes a more rufous colour during the breeding season and acquires the dark tummy feathers you can see on these birds. I’m guessing they’ll be heading for the hills shortly to find a mate.