During yesterday’s walk along the southern edge of Cardiff Bay, I spotted this huge metre-long fish cruising along sluggishly very close to the embankment. Turns out it was a Salmon, possibly returning to the Bay after having spawned somewhere high up in the River Taff. 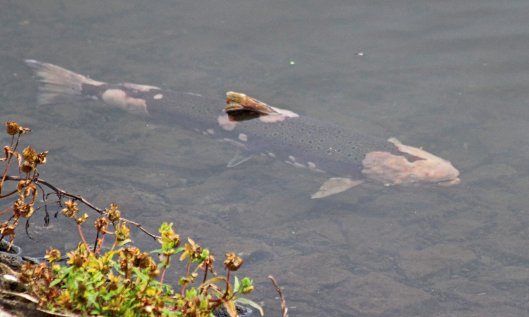 Sadly, this fish has probably now reached the end of its life … but what a life! As Will Millard kindly explained on Twitter, this Salmon may have

been born in the Taff, migrated to sea, possibly even as far as Greenland, to pile on weight, mass and muscle over a few years, before returning, hundreds of miles home to spawn and then die. It’s sad when any animal comes to the end of its life, but what a story & other life is sustained from the salmon carcass. In parts of Canada and Alaska whole forests gain massive parts of their nutrients purely from salmon dying at the end of the salmon run.

Will also explained that Salmon often develop skin infections during times of stress, which may explain the pale, ‘cotton wool’-like appearance of parts of its skin.