As part of this morning’s local meander, I went for a beachcomb at the base of the cliffs at Penarth Head – not too close to those cliffs as they’re continually shedding small stones and occasional larger boulders but it’s safe enough nearer the water’s edge when the tide’s going out. I didn’t linger long as people arrived to run their dogs, sending sand and stones everywhere. However, I did find this little beauty before they arrived – a fossilised seashell I think.

p.s. My fab Facebook friend Mark says that the only ‘Jurassic bivalve with that pattern in my books is something called Oxytoma inequivalvis’, so now we have a name. Thanks, Mark.

I may not have a sea view but one of the joys of living by the seaside is that I can walk to the beach in less than 10 minutes. So, although today was mostly spent on various chores, I still had time for one of my favourite things, a fossick along the stony shore. I picked up a few nice bits of sea glass, a couple of perhaps old bits of pottery – I like to pretend I’m on Time Team and have found something ancient or Roman, and what may be a fossilised seashell. 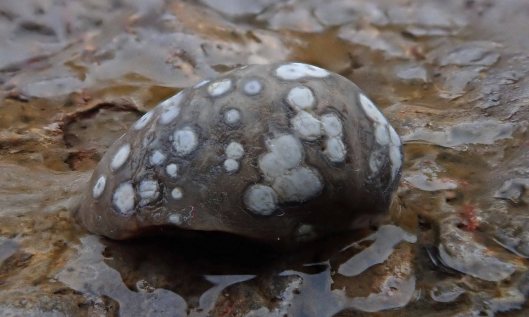 p.s. My friend Mark, who knows a thing or two about fossils, says that the ‘thing’ in my photo ‘looks to be a Gryphaea aka Devil’s Toe Nail, but in this case, instead of the calcium carbonate that usually replaces the shell, it has been replaced by a mineral called beekite, which is a form of silica. It’s the beekite that has created those pale circular patches that cover the surface.’