Don’t you love it when a plan comes together? A couple of months ago I found this small bit of wood with tell-tale green colouring so secreted it in a damp place in the woodland.

When I checked it yesterday, result! These are Green elfcups, still tiny but hopefully there will be more next time I look as they usually fruit in the autumn. 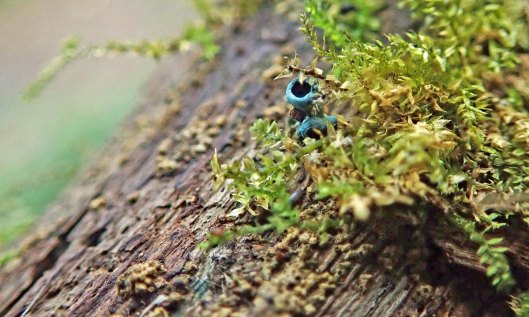 I’d seen these gorgeous little cup fungi a few times before but last Saturday was the first time I’d found them myself, in nearby Nant Fawr Woodlands, and it’s fair to say I was over the moon! They’re tiny – I deliberately took a photo of my hand holding the fallen branch they were growing on to show their size – but their colour is so unusual that it catches the eye, so they’re not that difficult to spot, though they’re also not very common.

Now, I don’t know about you but I would describe their colour as turquoise, or near as dammit, but there are two very similar species of these cups and these are more likely to be Green elfcups (Chlorociboria aeruginascens) rather than Turqoise elfcups (Chlorociboria aeruginosa), as the latter are smaller and quite rare. Microscope work is needed to distinguish the two and even that is reported to be difficult. 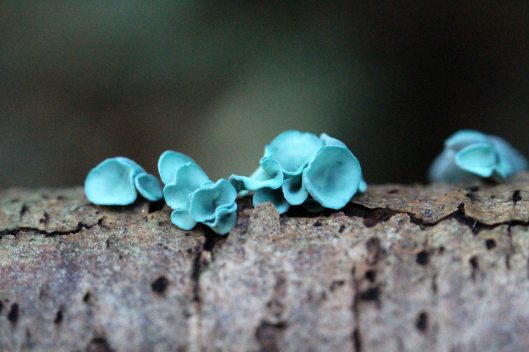 One fascinating thing about these beautiful fungi is the green staining they cause in wood, and, not surprisingly, that wood is highly prized by woodturners. In fact, in Victorian times, green-stained oak was one of the woods used to make Tunbridge ware, the name given to a type of inlaid decorative woodwork that haled originally from the towns of Tonbridge and Tunbridge Wells in Kent. The antique pieces are still highly sort after by collectors and just a little out of my price range but they certainly are lovely.