It seems you never know what you might find inside an old rubbery Jelly ear fungus. I certainly didn’t expect to find this delightful little creature, an Orange ladybird (Halyzia secedimguttata). They usually overwinter in a cosy spot amongst the leaf litter or tucked away in a crack in tree bark but the Jelly ear was on a fallen branch and I guess it looked like a snug cave to an insect that’s only 4-6mm long. 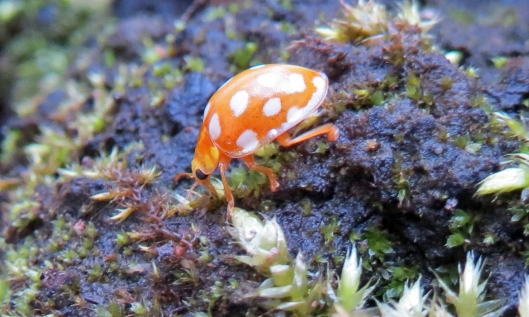 Until 1987 the orange ladybird was thought to live only in ancient woodland but then it discovered it rather liked living on sycamore trees and later developed a liking for ash trees as well, so now you can find it in any woodland, park or garden in Wales and England where these trees grow. It is less common in Scotland apparently – perhaps too cold? 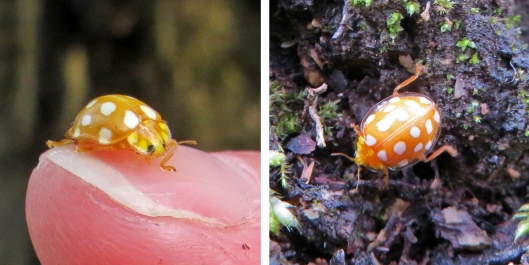 The Orange ladybird feeds on the powdery mildew fungi that grows on trees and has an interesting lifecycle, laying batches of up to 40 eggs at a time, which hatch as larvae, which eventually pupate while the adult ladybird develops. Fascinating!