The day I did my biodiversity hunt at Cathays Cemetery was a bumper day for moths, with three new species spotted. 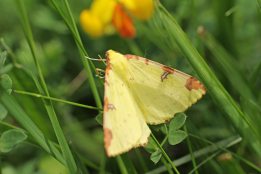 The first was this beautiful Brimstone (Opisthograptis luteolata), not to be confused with the butterfly of the same name, though both are a mellow buttery yellow. I was flat out on the grass photographing this when a group of young school children passed by. ‘Teacher, what’s that lady doing?’ ‘I don’t know, David’, came the reply, as the teacher quickly ushered her charges past the mad lady lying down in the cemetery!

The Cinnabar moth (Tyria jacobaeae) is a colourful character. It starts out life as a bright orange and black caterpillar, then transforms into a bright red and black moth – it gets its name from the bright red mineral mercury sulphide, also known as cinnabar. The caterpillars can be cannibalistic when their food source is scarce and, though I never saw them there, these moths were introduced to New Zealand in an attempt to control the invasive ragwort plant on which their caterpillars feed.

Last but certainly not least, as I saw several of these in one small area, was the Burnet companion (Euclidia glyphica). It apparently gets its common name from the fact that it’s often seen in the company of Burnet moths – not on this day! I make no excuses for showing its bottom, as the colour of its underside is a rich orange, almost more attractive than its top. Though they were mostly skittish, one very obligingly remained still long enough to get a head-on shot, which I love.

6 thoughts on “Three moths in one day”