What an intriguing insect this is! I’d heard of spittle bugs, of course, but didn’t really know anything about them until I started researching their story to go with my photos. Briefly, here’s what I’ve discovered …

The Red-and-black froghopper, scientific name Cercopis vulnerata, spends most of its life as a nymph living around the roots of trees, and the adults only appear above ground for a few short weeks in the summer. 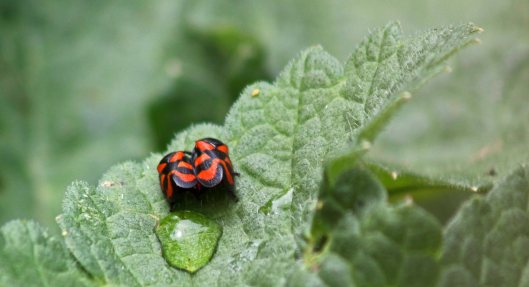 So many British insects are hard to identify but the colours of this froghopper make it truly unmistakable – good news when it’s looking for a mate. Please excuse yet another voyeuristic photo of insects in copula! 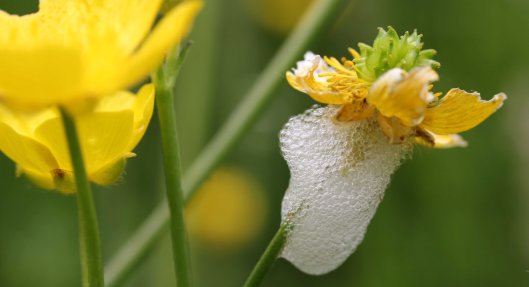 Now comes the weird bit, the ‘cuckoo spit’, so named because it appears about the same time cuckoos reappear in Britain and can be heard broadcasting their characteristic call, though why the spittle is referred to as their spit escapes me. And it’s not really spit at all – it’s produced by the tiny froghopper nymph to protect itself from drying up and as a place to hide from predators.

This cute little nymph actually mixes a fluid from its anus with a secretion from its abdominal glands and then blow bubbles into the mixture from a valve on its tummy. (And I touched that stuff!) After hanging out in its bubble sac for a while, the nymph heads underground, where it sheds its skin several times before changing into its red-and-black adult form and starting the process all over again. 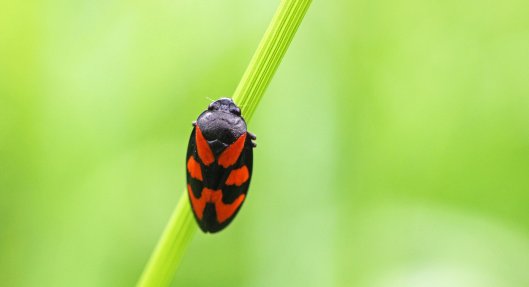 Oh, and the froghopper part of its name comes from the way it imitates a frog by leaping away from danger, though I’ve never seen one do that. Maybe my camera and I don’t look all that dangerous.

8 thoughts on “All spit and no cuckoo”