Following on from yesterday’s post where I (hopefully) sent you all on a quest to find the Holly parachute fungus, I thought I’d kill two biological records with one outing, and also get you to look for another species related specifically to holly. 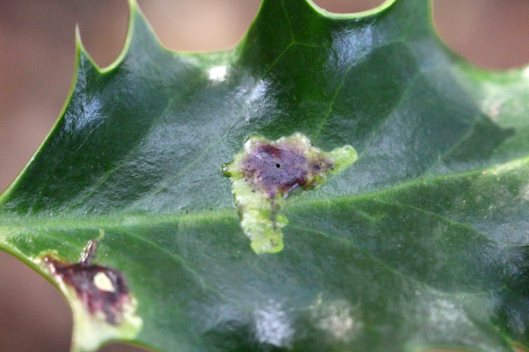 This is the Holly leaf-miner (Phytomyza ilicis), a small fly that lays its eggs inside the leaves of holly. ‘Inside’ may sound strange, but holly leaves are relatively thick and leathery so, once the eggs hatch, they make the perfect home for the fly’s larvae, which live out their lives feeding on the flesh of the leaves and making a little home for themselves in the process. Their feeding creates multi-coloured blotches on the leaves so, although you’ll probably never see the fly and probably not even the larvae (unless you slice open a leaf at the right time of year), you can always tell where they’ve been. Once they’ve eaten their fill, the larvae pupate inside their leafy homes, then open a small escape hole once their transformation is complete and fly away to start the process all over again. 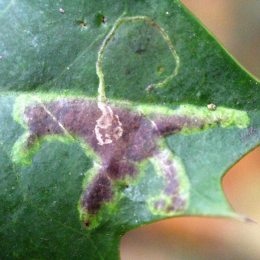 Co-incidentally, the Holly leaf-miner is species of the month (really, two months – November and December) with SEWBReC, the South East Wales Biodiversity Records Centre. Like yesterday’s Holly parachute fungus, there are few biological records of the leaf-miner but it is almost certainly just under-recorded because, once you start looking for those tell-tale blotches, you quickly discover it’s almost everywhere. So, get looking and recording!