I saw my very first Oudemansiella mucida, the Porcelain Fungus, last Friday, during a wander around Cardiff’s Heath Park and knew at once what it was. Such immediacy of identification does not happen often in the world of the fungi fanciers so this was a rare and much-valued moment. But this is one fungus that is easy to recognise.

Firstly, it lives exclusively on beech, and I have been keeping a close watch on a huge old beech tree that came down in a big storm last winter, which, much to their credit, was sawn into huge chunks and left at the woodland edge by Cardiff Council staff. The beech is now providing a home to many small creatures, not just to fungi. Secondly, it is a clean, almost translucent white, like my granny’s tea cups used to be, and its caps are frequently covered in a thin layer of slime (hence the second part of their scientific name: mucida refers to this transparent mucus). That’s not as revolting as it sounds – the shiny surface makes these little beauties shimmer in the sunshine. 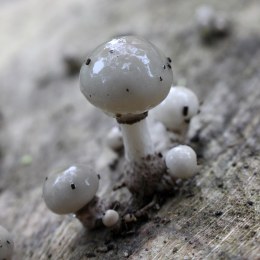 Interestingly, this fungus produces chemicals called strobilurins, which have anti-fungal properties. The Porcelain Fungus uses them to inhibit and even attack opposition fungi in order to protect its territory but scientists have refined these same chemicals to produce anti-fungal agents that can protect crops from fungal attacks. Like so many fungi, the Porcelain fungus is beautiful and utile. 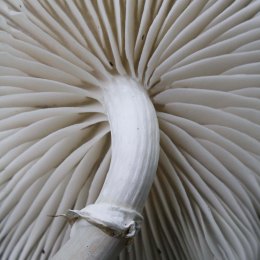 Yesterday I feel in love. His name is George, George Wood, and he lives near the charming little village of Dinas Powys, west of Cardiff.

Although these beeches are recent, they are now considered an essential part of George’s personality.

George is a bit smelly at the moment because of his preference for masses of wild garlic, but his stunning good looks more than make up for this passing phase.

Though it’s his beeches that made me fall in love with him, I’m sure I will also come to love his oaks and ashes just as much. I can’t wait to get to know George better!