I was watching a Moorhen feeding its five tiny chicks when I heard it, the unmistakeable scratchy song of a Whitethroat (Sylvia communis), my first for 2022. And then, forty minutes later, I was walking along a hillside when I heard it again – not the same bird, of course, but my second scratchy tune of the year. As I’m still without a reasonable camera, today’s photo shows a Whitethroat I encountered last year. 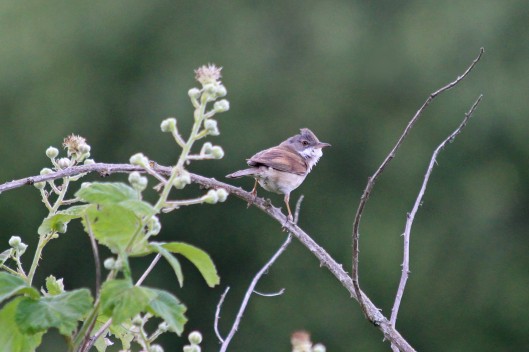 I had a mystery bird during yesterday’s walk. It flew high over the west paddock at Cosmeston Country Park, heading north, in slow circles, mobbed by corvids and gulls. It was carrying something that seemed to have a snake-like shape, long and thin and dangling from its claws. Looking through binoculars, my impression of the bird was that it had dark grey/brown wings, a very pale, possibly white body, and a small pale head.

I had an idea what it might be but had never seen that species before so took as many photos as I could with my point-and-shoot camera (the telephoto lens on my DSLR camera has died and I can’t afford to replace it at the moment – what a time not to have a good lens!). Fortunately, local expert birders and our county bird recorder were able to confirm, from my description and the photos, that I had seen my first Osprey, migrating north to its breeding site after over-wintering in Africa. Welcome home, you beauty!

As is often the case with this little brown bird, I heard it before I saw it, not the song but the short nasal ‘churring’ call these warblers make to keep in touch with each other deep within the reed beds.

Luckily for me, as this particularly Reed warbler foraged its way along the brook, I could follow its movement by the bending and shaking of reed stems, and when it occasionally ventured out to the edge of the reeds, I was able to grab some images.

Small though it is – around 13cm in length, the Reed warbler (Acrocephalus scirpaceus) migrates from Britain to over-winter in sub-Saharan Africa, so this little bird has quite the journey ahead of it.

It’s not only humans that like to go foraging for ripe berries in the autumn. Though the raw berries of the Elderberry tree (Sambucus nigra) are mildly poisonous to mammals, they do not seem to affect fruit-eating birds, and Blackcaps, in particular, love to feast on them. This beautiful female had interrupted her migration journey south to top up her tank with their succulent goodness.

Thanks to a chat with local expert birder, Graham, I saw splashes of autumn, the flashing orange-red of a young male Redstart, at Cosmeston yesterday. 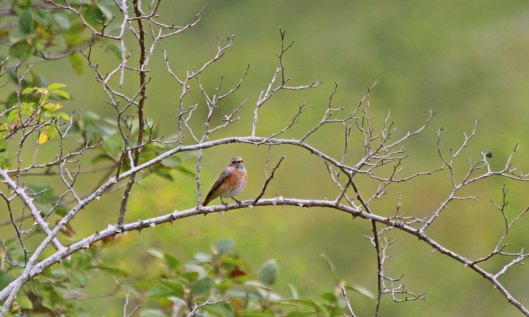 And he – the bird that is, not Graham – certainly wasn’t shy about displaying the glorious colours under his tail and wing, as he flitted from bush to ground to small tree to wire fence in his constant search for food.

There was another bird calling constantly very close by, probably a second Redstart, but I didn’t manage to get on to it before getting a message that there were Whinchats on the other side of the park. I love this time of year – you never know what’s going to turn up next.

Though I live near the sea, I don’t get to see Dunlin very often as the coastline near me is mostly cliffs and rocks, not the stretches of mud or sand these little waders can easily feed on. 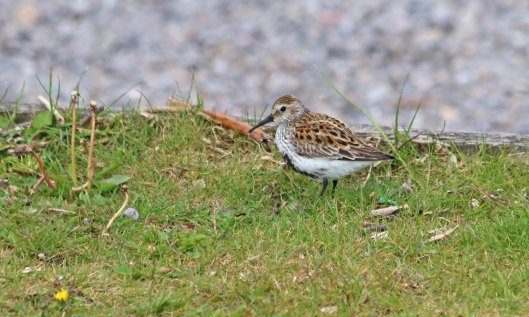 So, it was a real treat during Monday’s walk around Cardiff Bay to see this single Dunlin foraging on the edge of the Barrage.

Flocks of Dunlin, and other waders, pass along our shoreline at this time of year on their way to their breeding grounds and, very occasionally, drop in briefly to feed, as this one was. And to have a good scratch …

After taking several photos, I left the bird in peace to forage further, grateful for the birding treat!

I’ve only seen Yellow wagtails a couple of times and never locally so, when they were reported flitting about Cardiff Bay, I went walking that way. On my first walk past where they’d been reported, I couldn’t find any – I dipped as they say in birder speak, and I’ve been dipping a bit lately so didn’t bother trying again the next day. 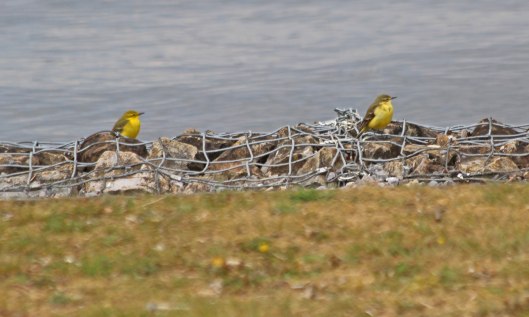 Then, last Friday, I thought I’d pop over to the wetlands reserve to see if I could find any Sedge warblers to photograph. Those birds were being very vocal though visually elusive but then I spotted a couple of birders I know who were obviously looking at something interesting. Turns out, it was a Whinchat, my first of the year – good news! – and then both chaps said they’d seen more Yellow wags that morning, dotting around the grassy areas on the Barrage. 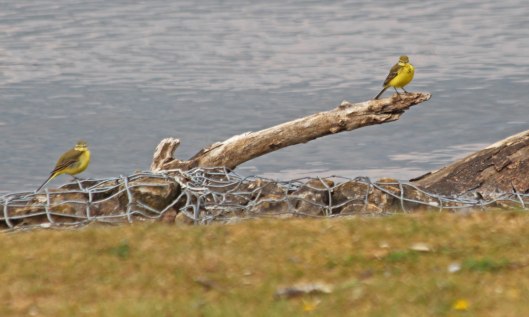 So, a quick change of plan saw me strolling in that direction and, remarkably, the birds were still there. Four gorgeous little bursts of vibrant yellow, easily disturbed by walkers and dogs, but I managed to get some quality watching time and a few distant photos before they headed off over the water. Magic!

Last Thursday’s walk was very similar to walks I’ve written about previously (a Superb Sully stroll, 23 April 2019, and The Whimbrel and the Barwit, 30 April 2017), and the reason I repeat the walk, sometimes several times, at this time of year is hopefully to catch sight of migrating Whimbrel (and Bar-tailed godwit).

A local birding friend had reported sightings, and the tide was right – as the Bristol Channel has the second highest tidal range in the world, it’s best to look over high tide so the birds are relatively close to the coastal path. 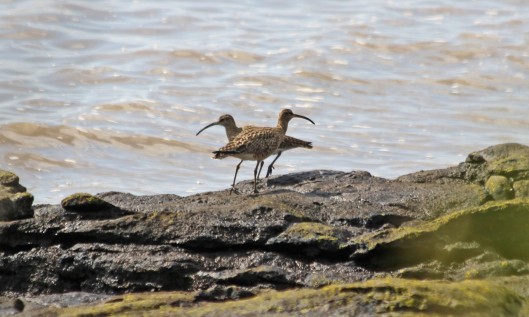 And I was lucky to see several Whimbrel. There were perhaps six or seven birds but I’m not sure of the exact number, as they were quite flighty, and would head off along the beach when disturbed by people and their dogs walking along the path and the rocks.

These birds are part of the annual migration, seen locally during April and May, when Whimbrel that over-winter in West Africa move through to their breeding grounds in more northerly latitudes (according to the Bird Guides website, Iceland, Scandinavia, the Faroes and Shetland are their likely breeding locations.) 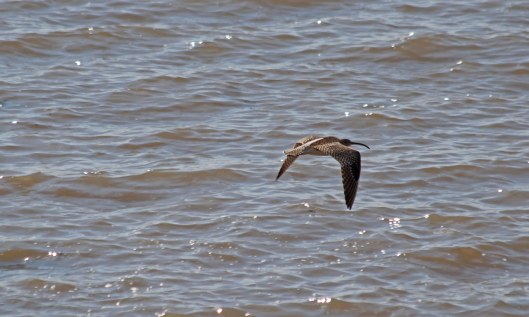 Bird migration never ceases to amaze me. To think that this little tiny bird has flown all the way from Africa, a journey of 5000 miles, maybe more, and that it may already have made the journey there and back several times. It was a genuine treat to see and listen to this global traveller, my first Willow warbler of the year, at Cosmeston on Friday. 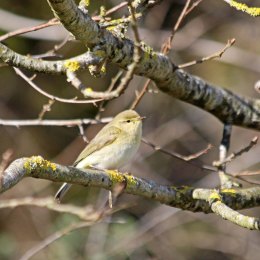 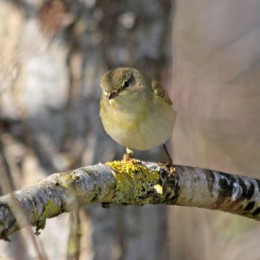 Monday was warm and sunny, at last – sunny days have been few and far between so far this month – so I decided to walk a circuit of Cardiff Bay, hoping this might be the day I would see my first Wheatear of the year. 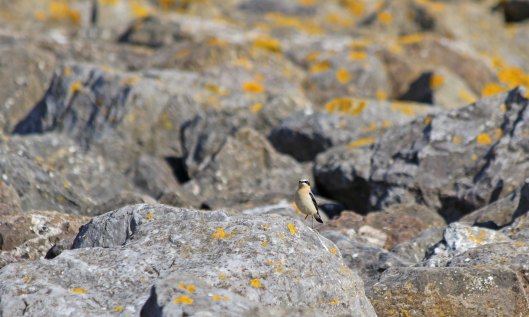 I was already on the Barrage, bins out and scanning, when I got a message from a fellow birder that a Wheatear had just been reported. As I checked further along the Barrage, I could see someone, off their bike, camera with long lens in hand – that had to be where it was.

It only took a few minutes to reach Tate, one of our star local birders, whose keen eyes had found this stunning male Wheatear. We’re lucky that these birds sometimes stop off for an insect break on the Barrage rocks before continuing their migration flight to their breeding grounds further north. Such a treat to see!