August is the time of the crickets, when many species mature from nymph to adults and the males begin their night-time wing-against-wing-rubbing (called stridulation) to advertise their presence. 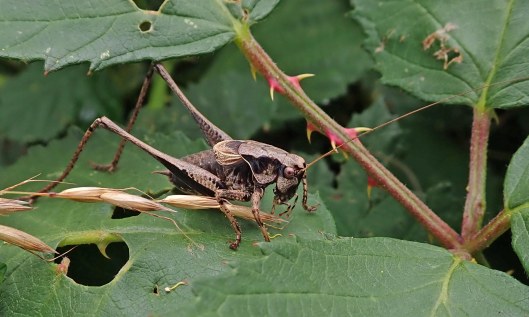 I found this Dark bush-cricket sunning itself on a bramble bush. It started to move under a leaf as I approached with my macro-lensed camera but then kindly consented to pose for some images. It’s such a handsome beast, with its dappled brown body armour.

This Speckled bush-cricket also wasn’t sure about me getting so close but somehow sensed I wasn’t a threat. She’s a stunning female – the dagger-like appendage on her rear is her ovipositor, used to lay eggs in tree bark and plant stems.

I’ve been back to the field where I saw Friday’s ‘grappling grasshoppers’ to investigate the other interesting insects I noticed. This is one of them, a gloriously ‘armoured’ Dark bush-cricket (Pholidoptera griseoaptera). 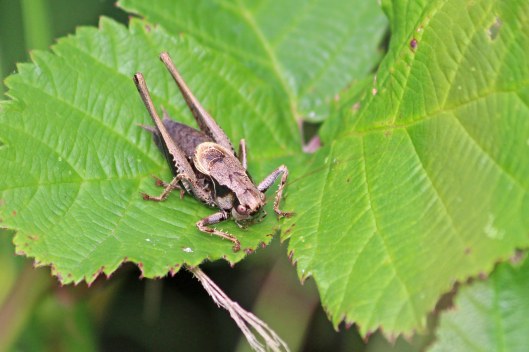 According to the Buglife website, you ‘must creep up on them to see them properly’ but, luckily, I had my zoom lens, plus this creature was probably quite confident in its ability to out-leap me if necessary and was too happy basking in the sunshine to be bothered about me. 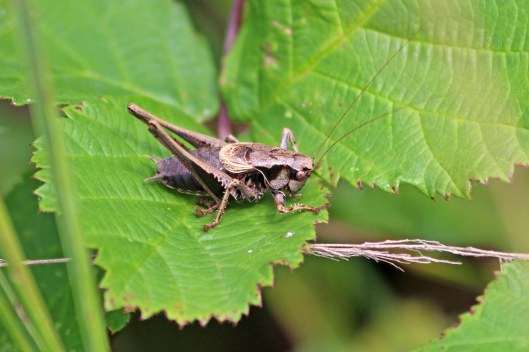