These three are often the first hoverflies seen in the springtime as they all over-winter as adults, so it’s no surprise that I’ve now seen these three species as well my first for 2021, the Melanostoma scalare I blogged about 10 days ago (First hoverfly, 25 February). We’ll need a bit more sun and warmer temperatures before more hoverflies are out and about though. 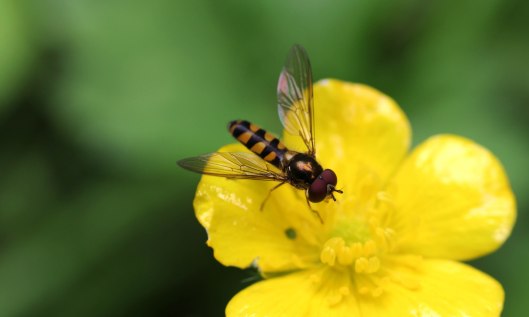 A snippet from my volunteer work on the ‘Dedicated Naturalist’ Project, helping to decipher and digitise, record and publicise the life’s work of naturalist extraordinaire, Dr Mary Gillham. This is the type of delightful insight we volunteers often discover when mining Mary’s copious archives for biological records. Never a dull moment and frequent chuckling make a volunteer’s work fun!

Eristalis tenax drone flies   MATING, presumably, on 10 July 1981. The larger female sitting on flower head – buddleja, hogweed, thistle, &c. Male, or up to four males, smaller but marked exactly the same, narrow yellow bands on black, hovering 2-3” above for often considerable while before darting momentarily down, sweeping a tail across hers and swooping away again. No wonder he has to hover so persistently to get his aim just right for the ‘brief but fleeting pleasure’. Only 1 male is accepted, she flying off almost at once.

My images are the same genus but not the same species as Mary’s though their behaviour is similar. The top image is Eristalis pertinax, a very common hoverfly in much of Britain, and the lower image depicts a female (left) and male (right) Eristalis arbustorum, in a situation similar to that Mary has described, with the male awaiting his chance to pounce.