Female ducks, of various species – in this case Mallard, are often under-appreciated. But, with a little time and some close observation, I think we can all learn to appreciate the sublime subtly of their plumage, the tonal colour variations and the intricacy of their delicate patterning.

Today’s exercise walk saw me up and out of the house by 7am for a stomp down to Cardiff Bay and the embankment path alongside the River Ely. There was, and still is, a bitterly cold wind blowing, pushing small waves up on to the stones of the embankment so I was surprised to see any birds there at all. But the further up river I went the more sheltered it became and the embankment foragers appeared.

First up was this Redshank, poking about at the water’s edge, its feathers ruffled by the wind gusts. 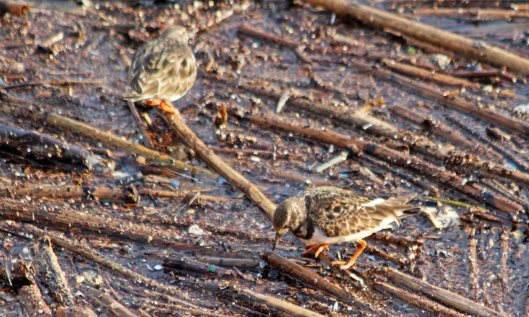 Next, in a corner where rubbish often accumulates, three Turnstones were poking about amidst the branches and twigs, plastic bottles and other assorted detritus.

Two Mallards came waddling hopefully up the stones while I was watching the Turnstones. Sadly, I didn’t have any seed for them today. 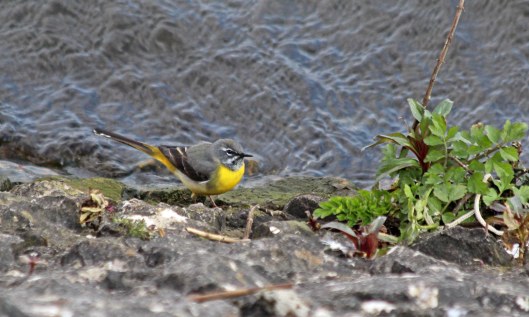 Lucky last, and most colourful, was this bright little button, a Grey wagtail, which was singing a little song to itself as it pottered along.

Some days, when it’s grey and misty and still a bit damp from the morning’s rain, the best thing to do is tuck your head under your wing and snooze the afternoon away – at least that seems to have been the opinion of this female Mallard on the Ely embankment today.