Two weeks ago, on 28 August, I spotted these House martin chicks still in their wonderfully engineered mud-built home, gaping greedily whenever their parents returned with niblets of food.

Today they, and the chicks from the neighbouring two nests, were out and about, practising their flying skills and catching their own insects to eat, but returning often to their nests as if not yet quite ready to break their bonds with the comfort and safety and security of home to fly the thousands of miles to over-winter in Africa. Soon though, their time will come …

I don’t think it will be long before this young House martin fledges and heads out into the wide blue yonder. 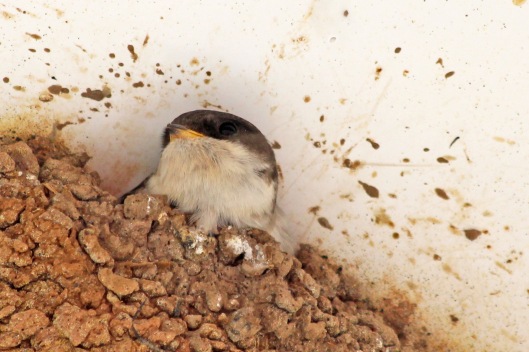 These nests are in a local street that I’ve blogged about previously, which I checked up on during a wander around the town today.

Several of the nests were still occupied with, what I assume to be, second broods of chicks. There are actually two in this nest – you can just see the beak of the second on the left.

When there are two nests sharing a ledge, there does seem to be the occasional spat with the neighbours, though I think junior, on the right, is more interested in whether adult, on the left, is bringing food.

Finally, one of its parents has arrived bearing snacks.

The House martins are back in town and have started refurbishing, renovating and rebuilding their nests so they can get on with breeding this year’s offspring. There’s one particular local street where the architecture of the houses suits them perfectly – the upper-storey windows have a decorative moulding which could almost have been purposely designed to have a nest propped upon it. 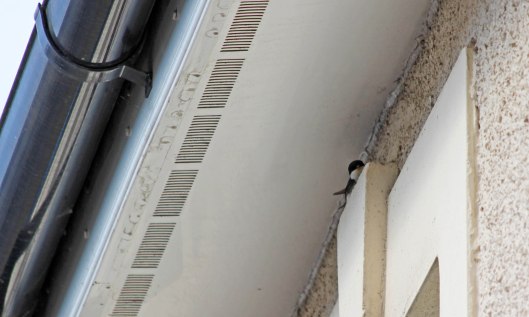 And what amazing nests they are! Imagine having to build your own home by flying to and from the muddy bank of a nearby stream, river or pond with small amounts of mud in your mouth, back and forth for hours until you’ve formed a structure that will safely house your eggs and later chicks. 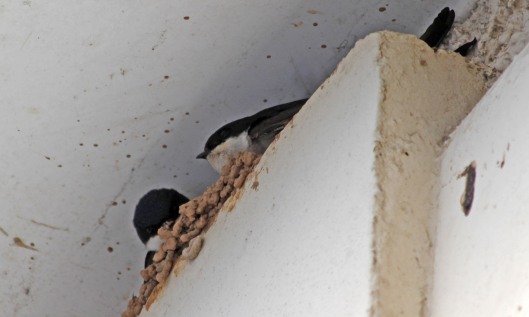 Sorry these photos aren’t great – the day’s been wet and grey, and it’s a little dark under the eaves so I’ve had to ramp up the light on these shots so you can get the picture.

Take a blob of mud, mix with grass or straw, and build! A rounded shape works well. Add an interior lining of feathers, moss and other soft vegetable matter et voilà! You have the perfect nest in which to raise your brood of House martins. 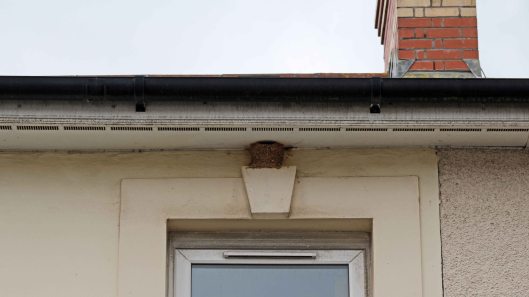 There’s a street near my home, where the houses have the perfect architectural feature for House martin nests. Just below the eaves and above the first floor windows there are small abutments, the tops of which provide perfect little ledges where the House martins can prop their mud-pellet homes. On a recent walk past I counted twelve nests, though not all appeared to be occupied. 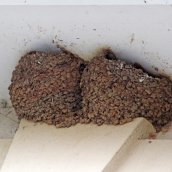 Of course, House martins (Delichon urbicum) would once have built their nests on cliffs – and some still do – but many have now become urban dwellers. The little colony in my local street is not uncommon as they prefer to dwell in groups, occasionally in large groups of several hundred nests though small groups of five to ten are more usual. Old nests are refurbished by returning birds, though not necessarily the original builders, and new nests are built where there’s space available, taking only one to two weeks to construct.

Though most humans live happily alongside their avian visitors, some get annoyed by their noise and the mess they create. Luckily, House martins and their nests are protected under the Wildlife and Countryside Act 1981 so it’s illegal to remove an active nest. I would feel privileged indeed to have a nest of these gorgeous little birds attached to my home.