How luscious is this?! Punctuated by shrub-like mosses, the multitude of colours like a kaleidoscope of flowers in bloom – it’s a miniature landscape of lichen.

Just one old fencepost, wood species unknown, but look at the number of lichen species it’s home to, as well as the lichen-loving Springtails. It’s a multifarious microcosm of the wider environment, a miniature landscape of vibrant colour and diverse shapes. Old fenceposts are usually worth a closer look. 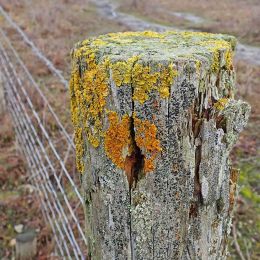 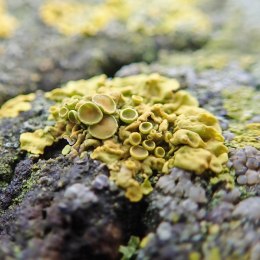 ‘There is a low mist in the woods—It is a good day to study lichens. The view so confined—it compels your attention to near objects—& the white background reveals the disks of the lichens distinctly—They appear more loose-flowing—expanded—flattened out—the colors brighter—for the damp—The round yellowish green lichens on the white pines loom through the mist (or are seen dimly) like shields—whose devices you would fain read.’  ~  Henry David Thoreau, A Year in Thoreau’s Journal 1851, Penguin, New York, 1993 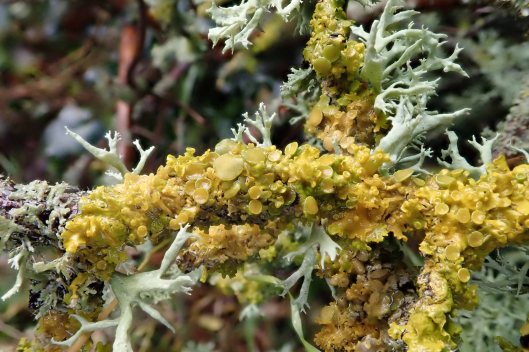 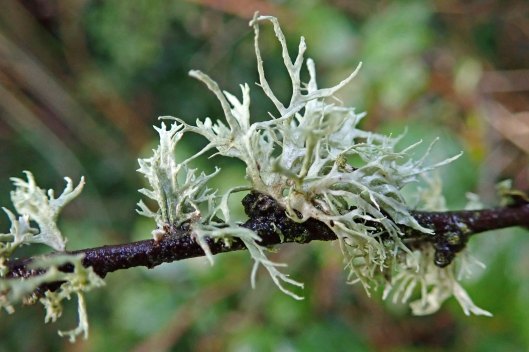 The big picture:
a group of wooden posts, incised with rune-like writing, once part of a sculpture trail around Cosmeston Lakes Country Park. 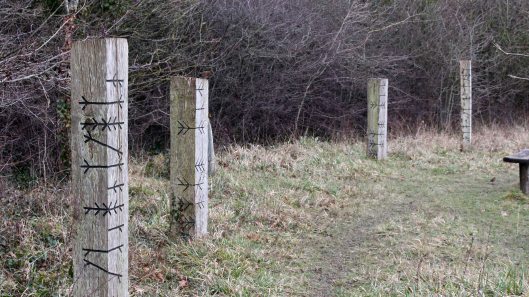 The small picture:
an incredible diversity of lichens, mosses and fungi in a surprising array of subtle textures and hues. 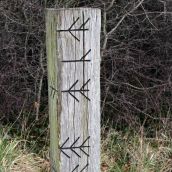 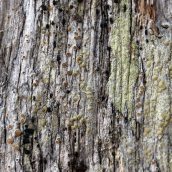 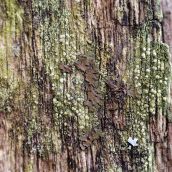 The ‘undiscovered country of the nearby’ ~ Robert Macfarlane, The Wild Places 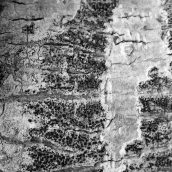 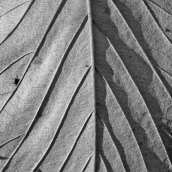 Americans call it the Hoary Rosette lichen but the Brits don’t appear to have a common name for this pretty little lichen, Physcia aipolia. I found it flourishing on wooden fence railings alongside the local coastal path so it obviously thrives in an exposed and salt-windswept location. Officially, it is usually found on the well-lit (I presume that’s sunlit rather than under lamp-posts) nutrient-rich wood of all manner of trees, their twigs and bark.

Its thallus (a plant body that doesn’t have stems, leaves, roots or veins) is foliose (has a lobed, leaf-like shape) and its apothecia (the cup-shaped fruiting bodies) have white rims, with dark brown or black centres. Physcia aipolia is widespread and common in Britain, though it does seem to prefer the slightly warmer and perhaps wetter climes of the south and west.

I haven’t been finding much fungi lately, partly because of my house move (taking up my foraying time and I’m also still exploring my new environment) and partly, I guess, because of the weather (we seem to swing from unseasonably mild and spring-like one day to bitterly cold and hailing the next so the fungi, if they’re smart, will be biding their time before sending out fruiting bodies). What I am seeing a ton of though is lichen, covering the trunks of trees, camouflaging slabs of concrete, coating old lamp posts, carpeting the tops of stone walls. The complexity of their structures, the multiplicity of their designs and the variegation in their colours are wondrous to behold. 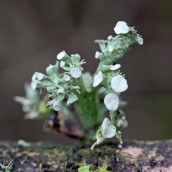 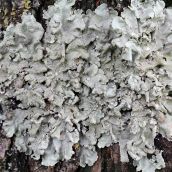 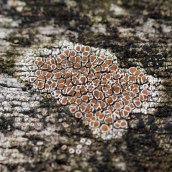 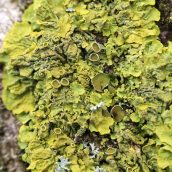 Though lichens are generally intolerant of pollution, this vibrant yellow and orange beauty is an exception and is even tolerant of heavy metal contamination. Its common names include common orange lichen, yellow scale, maritime sunburst lichen and shore lichen, from which you might correctly deduce that Xanthoria parietina is just as common on a rock at the seaside as it is on a tree in the city. It is also something of a globetrotter, being found throughout Britain and most of Europe, in North America, Africa and Asia, as well as in Australia. 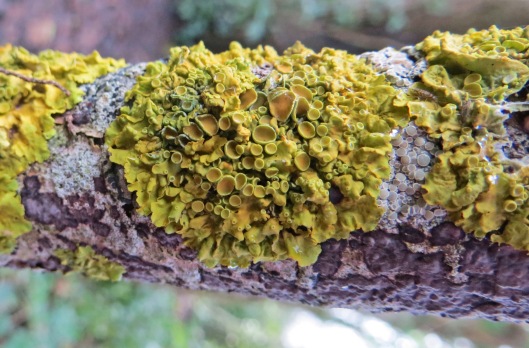 Working from the belief that a plant could treat a disease it most looked like, medieval herbalists used Xanthoria parietina to treat jaundice because of its yellow colour, and scientific research has since shown that it has potent antiviral properties. And, given the intense yellow and orange colours of this lichen, it’s probably no surprise to learn that it has also been used as a dye. It is, for example, one of the traditional plant materials used to dye wool in the Scottish highlands and islands, though the colour it produces is brown, not yellow.

Lichen have two methods of reproduction: one is asexual – they simply expand to cover more of the surface on which they’re living; the other is sexual but, it’s not the actual lichen that is reproducing sexually, it’s the fungus the lichen is in a symbiotic relationship with.

The saucer-shaped discs in my photos are apothecia, one of the two main types of sexual fruiting bodies of the fungi in the Ascomycota group, to which the majority of lichens belong. Spores (the correct term is propagules) are dispersed from these discs by air, water or attaching themselves to minibeasties, and must then meet up with an algal partner in order to form new lichen.

The yellow- and orange-coloured lichen in these photographs are, I believe, Xanthoria parietina, which is very common on both tree bark and stonework throughout Britain, and has a particular liking for Elder trees and coastal rocks.

Bordering the recreation grounds opposite where I live is a magnificent long line of copper beech trees. Their leaves provide a glorious show of colour in spring, summer and autumn but the trees look rather barren during the winter months. However, if you look closer, you’ll find their bark is alive with algae, mosses and lichens, and the colours, shapes and patterns of these small organisms are, indeed, many and splendid.

A lichen is a complicated entity – it is not actually one single organism but rather a fungus living in a symbiotic relationship with a photosynthetic partner, which might be a green alga or a cyanobacterium or both. The fungus is the farmer and the alga and/or bacterium produce/s the food it survives on.

Next time you see a lichen, look closer and be amazed! 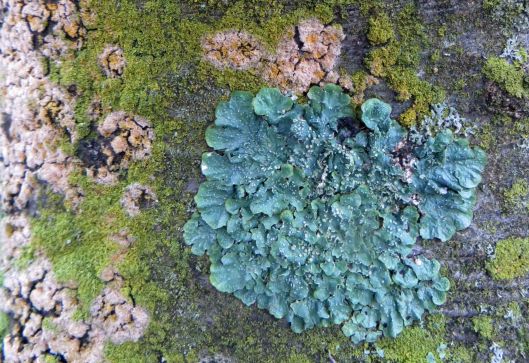