A snippet from my volunteer work on the ‘Dedicated Naturalist’ Project, helping to decipher and digitise, record and publicise the life’s work of naturalist extraordinaire, Dr Mary Gillham. In December 1959-January 1960 Mary made history as one of the first British women to conduct scientific research in the Antarctic region, as part of the ANARE expedition to restock the Australian Antarctic base on Macquarie Island.

Christmas 1959 was certainly a Christmas with a difference – wintry enough for the northern hemisphere, yet falling in midsummer. Our big meal was eaten buffet style; the mess hut would not rise to seating a population four times the size of the normal one. Antarctic skuas attended the second sitting (something which they scarcely waited for when the domestic fowl were being fed).

The skuas were the camp scavengers, fighting over the refuse bins and peering in hopefully through the window when the cook was at work. Occasionally one fell into the sink by mistake. It must be quite an experience suddenly to find a bird with a three foot wingspan flapping in your washing-up water!

After the Christmas toasts and speeches, Captain Hans Christian Petersen took the part of Santa Claus and came round with a sack of gifts. Our leader, Dick Thompson, had played a similar role at the Danish celebrations on board the previous evening. The captain warned us that we might well receive a pipe or tobacco pouch. The folks in Denmark could not possibly have foreseen that there would be ladies present on this auspicious occasion. 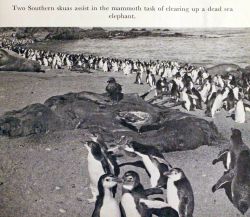 A snippet from my volunteer work on the ‘Dedicated Naturalist’ Project, helping to decipher and digitise, record and publicise the life’s work of naturalist extraordinaire, Dr Mary Gillham. In December 1959-January 1960 Mary made history as one of the first British women to conduct scientific research in the Antarctic region, as part of the ANARE expedition to restock the Australian Antarctic base on Macquarie Island.

Here we were in the “albatross latitudes”, where these greatest of all seabirds soar overhead like living sail planes. Albatrosses do not fly in the ordinary sense, but utilise air currents and turbulence. When the wind drops they are becalmed on the surface as surely as any sailing vessel.

It seemed incongruous that such noble birds should deign to eat the scraps from our table, in company with the scavenging host of smaller fry – the cape pigeons, giant petrels and Antarctic skuas. Although they did not scorn the scraps, they had, in fact, other motives for following us. They were cashing in on the fishy morsels such as squids which were churned up from below on the wake of our propellers.

The wandering albatross is a magnificent bird when viewed at close quarters and has no fear of man. I spent part of a memorable Christmas day within a yard or two of an old male bird with a wing span of eleven and a half feet. He had just started to nest on a level area of spongy bogland which provided an admirable landing field for his clumsy homecomings. He could only become airborne direct in a very high wind: usually he must walk several hundred yards to the sea.

On Christmas morning his mate had not yet arrived from her long sojourn at sea and he was whiling away the time by preparing a home for her. He did this in the easiest possible way, scraping a circle of mosses and sedges towards himself as he sat. This would build up into a miniature volcano, sufficiently tall to raise the chick above the snow.

A snippet from my volunteer work on the ‘Dedicated Naturalist’ Project, helping to decipher and digitise, record and publicise the life’s work of naturalist extraordinaire.

In December 1959-January 1960 Mary made history as one of the first British women to conduct scientific research in the Antarctic region, as part of the ANARE expedition to restock the Australian Antarctic base on Macquarie Island and, when she returned to Britain following her Antipodean adventures, she was asked to give a presentation on BBC radio about her experience. The programme aired in May 1961 and this is a small snippet from the text of Mary’s talk. 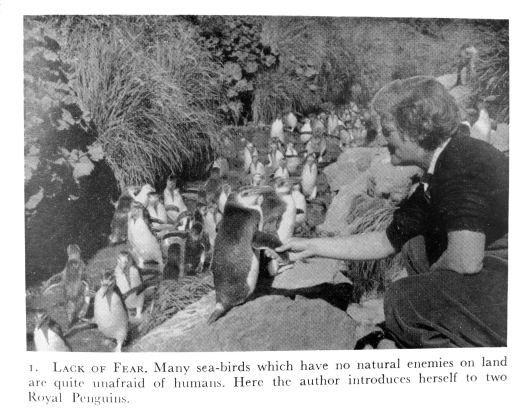 The quaintly human form of the penguin has made it a universal favourite among bird lovers. On the whole we found them friendly little people, quite ready to offer their flipper for a cordial hand-shake, as long as we were not too hearty about it. Soon after I had sat down on one occasion, a penguin came and squatted between my extended legs. After a few enquiring pecks at my boots, he tucked his head into his body feathers and promptly fell asleep. 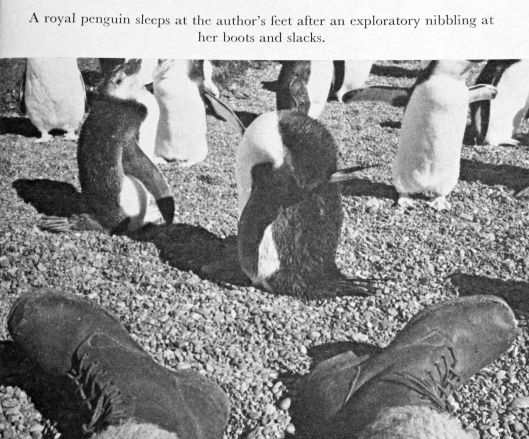 Meet Aptenodytes patagonicus, a King penguin that is over 100 years old! Sadly, it’s been dead for more than 100 years as well, transported from its chilly sub-Antarctic-island home in the southern Pacific Ocean to the smelly smoggy London of the early 1900s in the bowels of Ernest Shackleton’s schooner, the Nimrod, on his return home from the 1908-09 British Antarctic expedition. 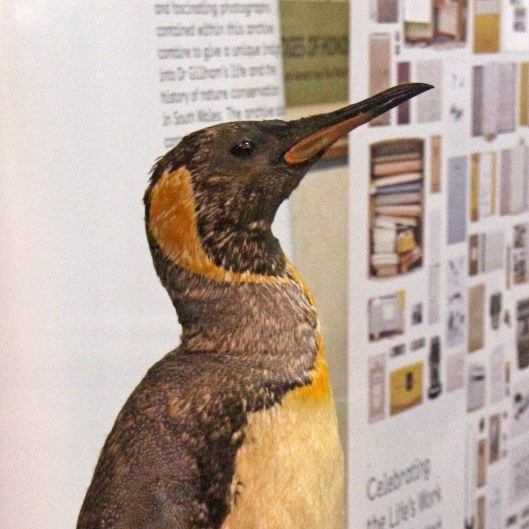 In its heyday, this penguin stood almost a metre tall, was probably born and lived its short life in and around Australia’s Macquarie Island, and thrived on a diet of fish and squid, diving down as far as 100 metres to catch its prey. It began life as an egg, propped on the feet of one of its parents for the 50-odd days it took to hatch and remained there for another 30-40 days once it had hatched (its parents took turns brooding it in the warm and cosy confines of a special flap of skin that covered their egg), before emerging as a cute brown bundle of fluff that would make even the hard-of-heart go “Awwww”.

Photographs of the Nimrod Expedition (1907-09) to the Antarctic, led by Ernest Shackleton; image dated 1908; source: Archive of Alfred Wegener Institute for Polar and Marine Research. This image is in the Public Domain.

As it grew and fledged, this King penguin developed a brilliant splash of yellow colour around its neck, making it one of the most vibrant of all the world’s penguins, though sadly its vibrancy has now mostly faded away. Still, this little penguin has travelled much further than most of its peers and even today brings much joy to those who see it, in its smart glass case in the National Museum Cardiff. If you’re curious about how it got to Cardiff, you can read more here, but if you’re curious about why a member of Shackleton’s crew was playing the gramophone to the Antarctic penguins, I have no idea – I just loved the photo! Perhaps you can tell me.