One of my favourite wildflowers is the humble dandelion. On grey winter days it provides a welcome burst of cheery yellow, and seeing the fluffy seed heads brings me fond childhood memories, of dandelion clocks to tell the time from the number of blows it takes to remove the seeds, and of making a wish when the last of the seeds blows away. 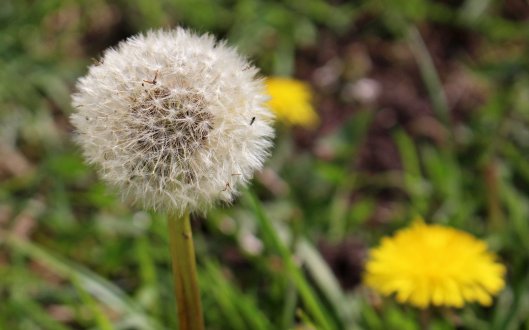 Officially labelled Taraxacum officinale agg., the common name dandelion comes from the French dent de lion, lion’s tooth, a reference to its deeply toothed leaves. In England, it is also commonly called ‘wet-the-bed’ and ‘pissy-beds’, from the idea that just touching a dandelion causes bed-wetting. Luckily, that’s not true, though the dandelion is a scientifically proven diuretic.

In fact, the dandelion is an extremely useful plant. It’s a good source of beta-carotene, is rich in Vitamin C and the B-complex vitamins and also high in protein, so has been used for thousands of years to improve the functioning of the liver, gallbladder, and urinary and digestive systems. And, though I’ve never tried it, dandelion is also widely used to make wine. So, the next time you’re tempted to eradicate these ‘weeds’ from your garden, think again and, instead, make use of Nature’s bounty.