It’s quite the transformation, from this green larva that looks a bit like a cross between a slug and a caterpillar … 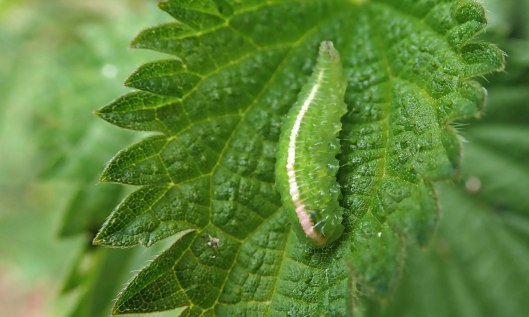 to this black-and-white flying creature. 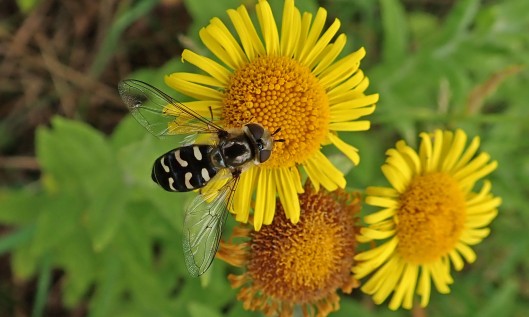 This is the hoverfly Scaeva pyrastri and, amazingly, it’s a migrant from mainland Europe. A bit like the Red admiral butterfly, Scaeva pyrastri has good years and bad years, sometimes visiting lowland Britain in large numbers, sometimes hardly at all. And, when it comes here, it does often breed locally (and here, I must add a caveat – the larva in my first image may actually be the other Scaeva species, S. selentica, though that species hasn’t actually been recorded in my area). 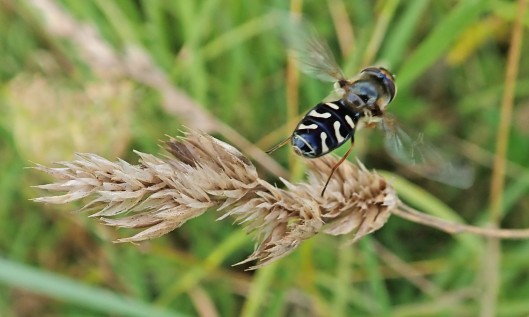 No, this is not a post about English grammar! I thought I would share more photos of hoverflies before they disappear for the year and it just so happens that today’s selection is not at all scientific – same genus, same habitats – they just all happen to be decorated with commas or dashes. 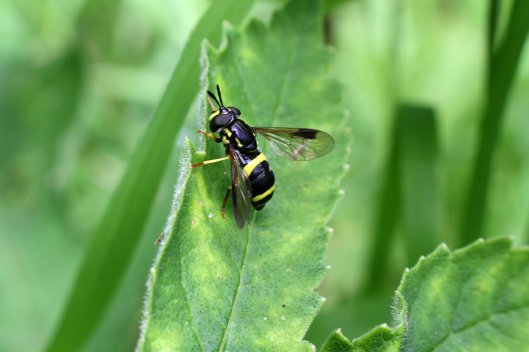 First up is Chrysotoxum bicinctum, with the two yellow stripes across its abdomen making it quite a distinctive hoverfly and also more easily identifiable than many. Its antennae are a little longer than most hoverflies so this little critter is really trying very hard to imitate a wasp … but without the sting. Usually found in grassy habitats with nearby trees and shrubs for shelter, Chrysotoxum bicinctum can be seen from May to September in most parts of Britain. 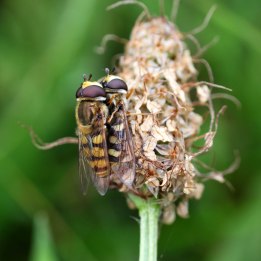 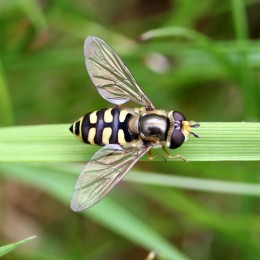 Also known as the Migrant hoverfly because, despite its small size, it is migrates across Europe and North Africa, Eupeodes corollae is rather a pretty little hoverfly. It can be a little tricky to ID as the males and females have different yellow markings and, to further confuse things, it is also very similar to Eupeodes luniger, up next. Interestingly, E. corollae has been used as way to control insects and aphids on fruit plantations and in greenhouses … but it turns out they ate more fruit than aphids! 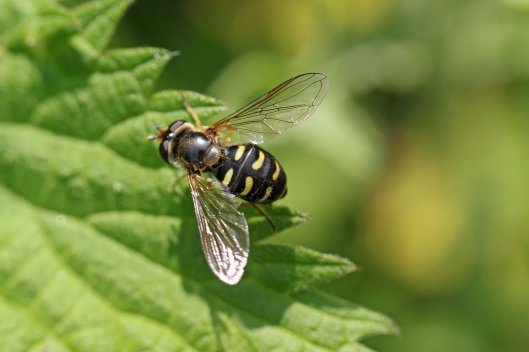 The difference between E. corollae and Eupeodes luniger is in those commas that adorn their abdomens. In E. corollae the markings extend to the edge of the abdomen, whereas in E. luniger they do not. That sounds an easy way to identify them but these hoverflies are not huge critters and it’s not always easy to see those edges. Eupeodes luniger is another migrating species that is known to fly long distances. In Britain they are mostly found in the southern counties. 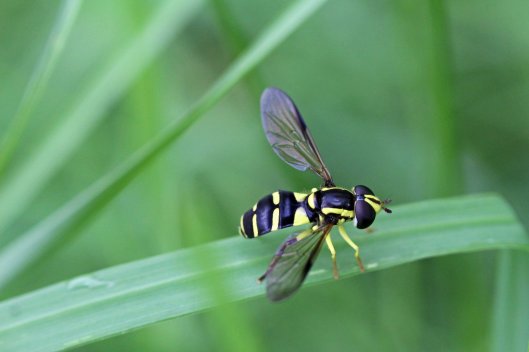 Last but certainly not least is Xanthogramma pedissequum, another striking wasp mimic, with characteristic vertical stripes on its thorax and horizontal dashes on its abdomen. Though peaking in June and July, it can be seen in southern Britain from May through to September, in grassy places and along tracks and trails where there is some bare dirt. Presumably, this is because their larvae feed on the aphids found in ants’ nests so they are looking along those pathways for suitable egg-laying places.