It will be a few months yet before I will be seeing any of these hairy beauties but they are worth the wait. These photos show the larva of the Drinker moth (Philudoria potatoria), which can usually be found feeding on grasses and reeds, particularly in damp places. The UK moths website reports that ‘This species gets its English (and Latin) name from the habits of the caterpillar, which is supposed to have a liking for drops of dew.’ 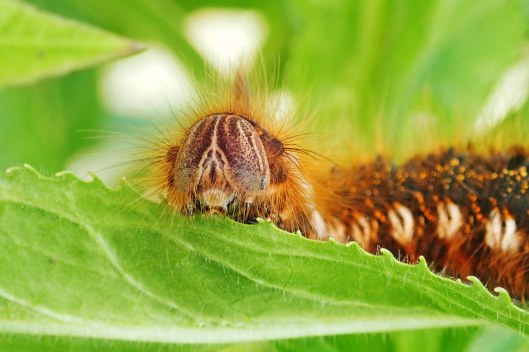 In theory, these caterpillars can be found now, as they hibernate when only partly grown, emerging in the spring to continue their development, but I imagine they are currently well hidden from hungry birds. My photos were taken last May, when these caterpillars were almost fully grown and would soon be pupating. I’ve never seen the adult moth but it is also a beautiful creature. 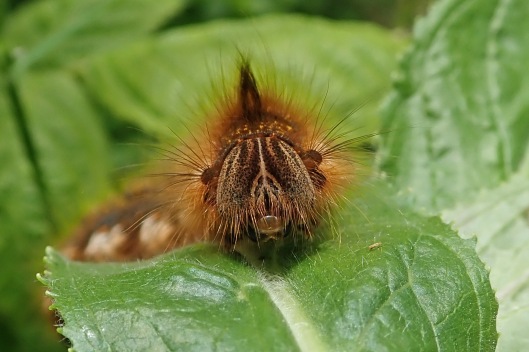 I thought I would explain about Colin the caterpillar (<click to see yesterday’s video). He appeared on my living room carpet about a week ago (I almost stood on him!) and I can only assume he somehow hitched a ride home on some part of my clothing or my backpack. Like the Winter caterpillars I blogged about on 15 January, Colin is an Angle shades moth larva. At the moment, he’s living in a jar on my desk – I wasn’t sure how long he’d been on the carpet so wanted to feed him up before I took him back to the wild. He’s just been through a moult, from 2nd to 3rd instar I think, so he’ll need to be released soon so he can pupate in more natural surroundings. 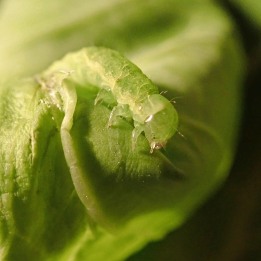 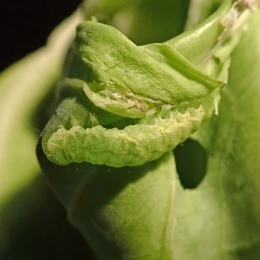 Is there anything more relaxing than watching a caterpillar eating?

I was heading home from Cosmeston after a lovely wander but not having seen much in the way of wildlife when this superb creature appeared on the pavement in front of me – actually, it was lucky I didn’t stand on it! 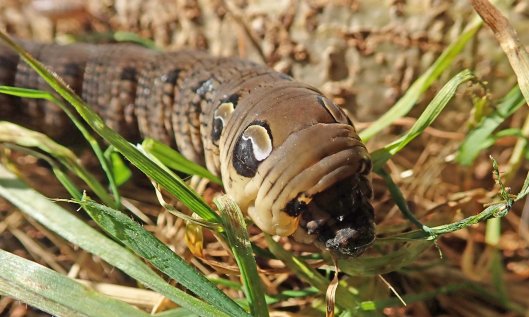 There was a family walking along not far behind me and I feared their combination of feet, pushchair and trike wheels might squish the creature so I quickly scooped it up and walked to a small area of waste ground where it might take shelter amongst the tall grasses, wildflowers and low scrub. 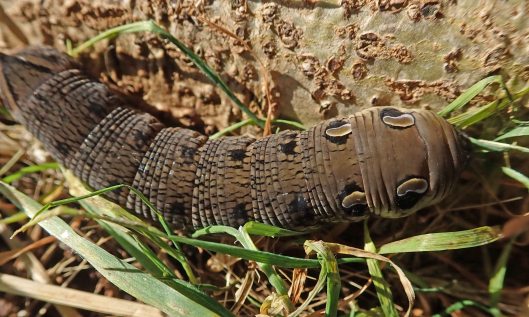 If you’ve never seen one, this is the caterpillar of the Elephant hawk-moth. It feeds on a variety of plants, particularly Rosebay willowherb, but also the other willowherbs, bedstraws, even Himalayan balsam, so can be found where those wildflowers grow. This particular caterpillar looked very well grown so may have been seeking a place to pupate (remember that pupal case I found back in April?). Let’s hope it found a cosy spot under the leaf litter in its new location. 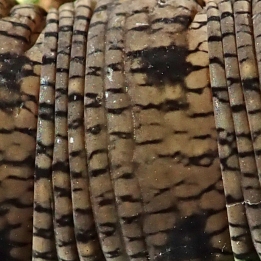 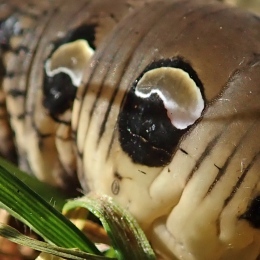 The Butterfly Conservation website says the dagger moths get their name from the dagger-like markings on their wings but check out the hump on the back of this Grey dagger larva – in the infamous words of Lady Macbeth from the Scottish play, ‘is this a dagger I see before me’? 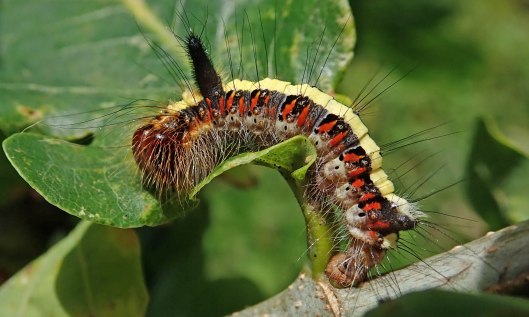 While wandering through my favourite woodland earlier this week, I noticed small areas of damage on some Hazel leaves. It looked like a little critter had been munching on them and, checking further, I soon discovered a lot of leaves had suffered similar damage. 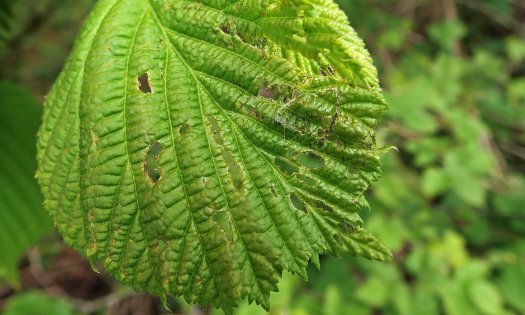 Closer inspection of one particular leaf soon revealed the culprit, a caterpillar, tucked away in a snug little tent it had created by binding two leaves together with silken thread. From there it could easily venture out to eat, yet retreat when threatened by predators or bad weather. Smart thinking! 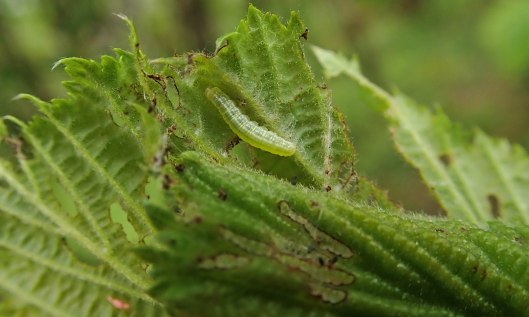 I think the caterpillar may be the larva of a Winter moth (Operophtera brumata) but I haven’t yet been able to confirm my identification (Update 16/5: ID now confirmed as Winter moth). Once I was alert to their presence, I noticed more leaf damage and several more ‘tents’, as well as a smaller caterpillar feeding out in the open. 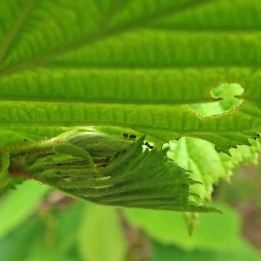 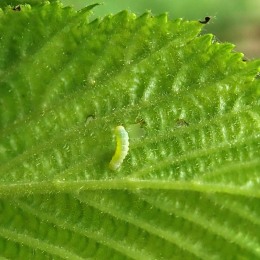 Most unexpectedly, I saw my first caterpillar of the year when I was out walking yesterday. It’s a Scarlet tiger moth caterpillar that was sitting on the stucco wall of a house I passed. According to my Twitter pal George, who’s a senior moth ecologist with Butterfly Conservation, though Scarlet tigers over-winter as larvae, these larvae are not usually seen until the spring. But spring is only a couple of weeks away and, if local bird activity is anything to go by, the wild creatures can already feel it in the air. 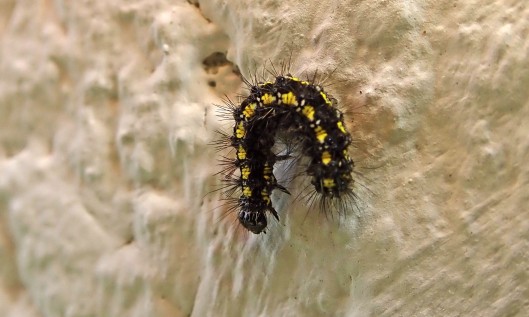 George reassuringly told me that caterpillars are tough but I do hope this little one finds somewhere a bit more sheltered to weather the cold spell that’s forecast for the coming week. I’d love to see it again when it emerges as an adult as they’re so beautiful and I’ve only ever seen the adults twice. The photo below, of a Scarlet tiger moth, was taken locally in June 2019. 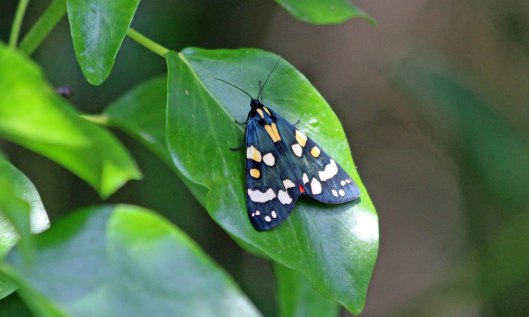 When I spotted this caterpillar yesterday, I didn’t think I’d seen one like it before but, when one of my Twitter pals later identified it for me, I realised I had seen one previously, though a younger model. 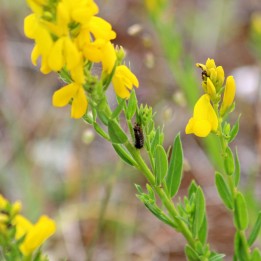 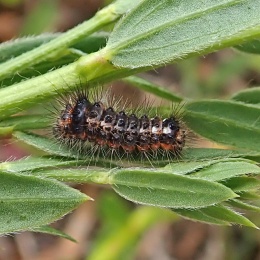 These are the larvae of the Knot grass moth (Acronicta rumicis), a moth I’ve never seen (you can see what the adult moth looks like and read more about it on the UK Moths website). I think the larva above, found munching on Dyer’s greenweed at Cosmeston on 4 June, is an early instar, whereas the larva below, found feeding on Common ragwort at Lavernock Nature Reserve on 10 September and a real stunner, is almost ready to pupate for the winter. 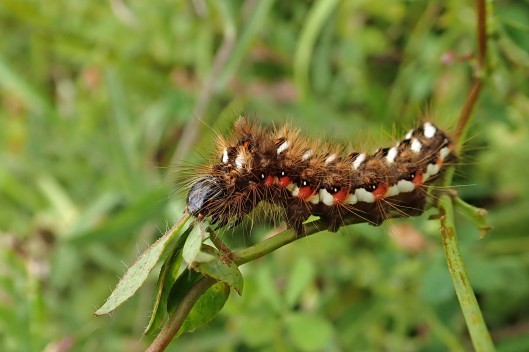 This tiny tufty character was a surprise find during yesterday’s walk. 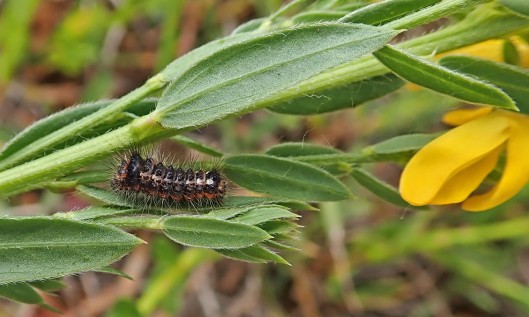 I guessed it was a moth caterpillar but had no idea which, so posted some photos on Twitter. It only took a few minutes for my moth-er contacts to give it a name – this is the larva of the Knot grass moth (Acronicta rumicis). 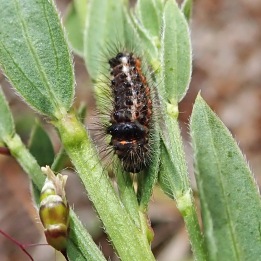 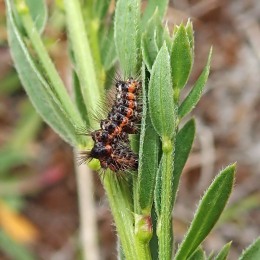 I’ve never seen the adult moth but it looks to be a beauty – you can see photos, and read more about both moth and larva, on the UK Moths website. 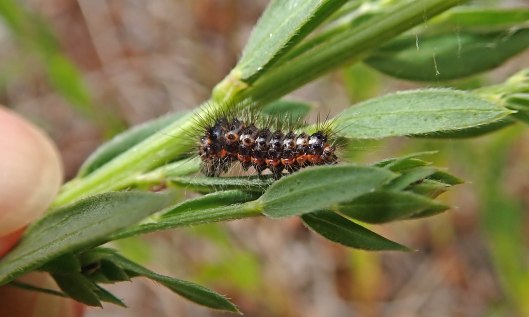