The Ruff is another bird I had only seen at a distance, or through the ’scopes of generous birding friends, before our recent birding weekend on Portland, when we got good views of a single Ruff during our stopover at RSPB Lodmoor. 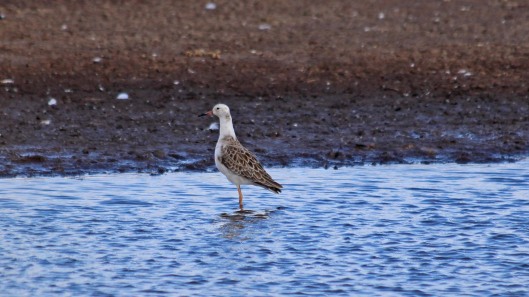 I have to say this was an odd-looking bird, with a head that seemed far too small for its body – especially on the white-headed winter-plumaged bird we saw – though it did have something of the look of an elegant dandy, with its snowy onesie topped by a splendid brown cape of wings.

The Ruff (Philomachus pugnax) is a particularly fascinating bird: in the breeding season the males, resplendent in long-feathered collars of red, black or white, perform dance-and-display competitions at specially chosen sites (known as leks) to attract females (known as reeves). And, even more fascinating, there are three different types of male – you can read more about that on the BTO website here. I assume, from its white head that the Lodmoor bird was a ‘satellite’ male but I may be wrong about that.

Ruffs can look quite hunched much of the time but will stand tall and alert when alarmed about something, as you can from the bird’s stance in the photo on the right above. I hasten to add that it wasn’t alarmed by the birders watching it but something – probably a bird of prey – had caused many of the nearby birds on the reserve to take flight, so the Ruff was keeping an eye on the skies. It also decided at this point that there was safety in numbers and sidled over to stand closer to the other waders nearby. 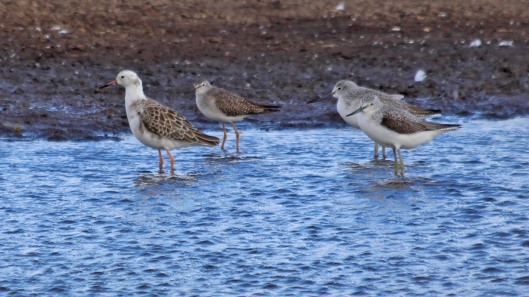 Ruff, on the left, with a Lesser yellowlegs and two Greenshanks

The Ruff used to breed quite extensively in Britain but now seldom does. We mostly see these birds as they migrate from their breeding grounds in Scandinavia to their wintering locations in Africa and vice versa, which is a great pity, as I’d certainly like to witness one of their leks some day.