Last Saturday afternoon, with much screeching and peeping, this year’s Lesser black-backed gull chick fledged from its home amongst a neighbour’s chimney pots – the same location and, presumably, the same pair of gulls as I’ve posted about here before (in The eggs have hatched!, June 2019 and Fledging, July 2020). I’m never sure whether the chicks’ departures from these rooftop nests are deliberate or accidental – some over-jealous wing-flapping, perhaps? But this year it was certainly well timed to miss the scorching heatwave – I can’t begin to imagine what the temperature would be on the rooftops in full sun.

I’m pleased to report the fledgling has made it through its first couple of nights and days. When I headed out early Sunday morning for a walk, it was sitting across the road in the local church grounds, an adult on the roof top keeping an eye on it, and that’s where it seems to have remained, a relatively safe and sheltered spot next to a very busy road. Fingers crossed for its continued survival! 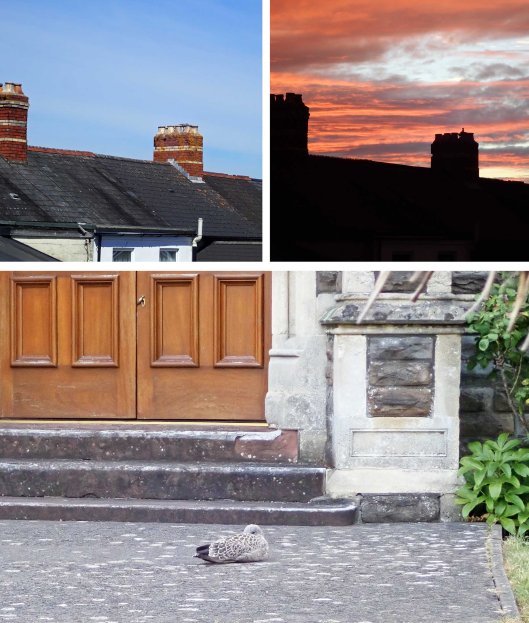 p.s. The top two images were taken when it was still in the ‘nest’; the photos are dated 11 and 12 July respectively.

I feel a bit like a proud parent sharing photos of their child when I post news of the Lesser black-backed gull that was born amongst a neighbour’s chimney pots but … here’s junior, a month on from the last update. It still comes back to the nest area almost every day, still screeches pleadingly at its parents for food, but it seems to be doing well, and looked rather splendid in the soft light early this morning.

From an initial count of three chicks, the local Lesser black-backed gulls nesting amongst a neighbour’s chimney pots have managed to raise one to fledging. I’ve been watching it practising its flying skills over recent days and, finally this morning, it has left the shelter of its nest site.

Though it was pottering around the rooftops for a while, I can no longer see the chick. Now follows the dangerous time for this fledgling of learning to find its own food, finding shelter against bad weather, escaping domestic cats and dogs in the various neighbours’ gardens, and avoiding cars on roads…. Good luck, little one!

The neighbourhood Lesser black-backed gulls, presumably the same pair as last year, have bred again, amongst the chimney pots of a house over the back lane from me. I first noticed them checking out their previous nesting spot a couple of months ago – the photo below was taken on 22 March, and there was a lot of mating activity in early May (see Bonding, 4 May). 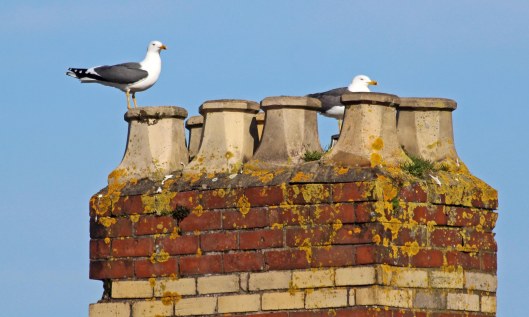 The female started sitting in mid May, and I spotted the first chick on 12 June.

Now there are three chicks, the same number as this pair started off with last year, though they only managed to fledge one. I’ll keep you updated on this year’s success (or failure) rate. Fingers crossed!

The best news! The biggest of the three Lesser black-backed gull chicks is still alive. It must’ve fallen off the roof. I had searched the back of the house with my bins and found nothing and couldn’t hear anything, but now it’s on the roof of the lean-to attached to the back of the house. It’s moving around just fine and a parent has been down to feed it. I suspect it may have fallen into the front garden (a miracle it survived the tumble), the home owners have found it, and moved it around the back and on to the roof so it could be seen by its parents. Fingers crossed!

I am the bearer of sad tidings today. All three of the Lesser black-backed gull chicks, who were living amongst the chimney pots across the back lane, have perished. I think one died a week or so ago, probably because it was the runt of the brood and was out-competed for food by its two older siblings. I’m not sure what happened to the other two – one was definitely much larger and more dominant than the other, so perhaps the smaller of the remaining two also died from starvation. I noticed the third chick had disappeared late yesterday afternoon, when I spotted a couple of the local Jackdaws inspecting the nest site – I don’t think they would’ve killed the chick, as it was bigger than them, and they seemed merely to be picking through the nest materials.

The female Lesser black-backed soon chased them off and has spent quite a bit of time sitting on the chimney pots, peering at the nest as if looking for the chick(s). She has also been staying nearby, as if she expects them to reappear and she’s been calling for them, which has been very sad to hear.

There have been many other gulls in the area, some of whom have been taking an interest in the nest. Several times I’ve heard lots of screeching and watched while the parents chased off the interlopers. I presume that, while the parents were out looking for food, either those gulls or some other predator has carried off the remaining two chicks. ‘Tis the sad reality of the natural world.

It’s time for an update on the Lesser black-backed gulls who are rearing their brood among the chimney pots on a house in the next street to mine.

First off, though I thought initially that there were only two, there are, in fact, three chicks, though one is significantly bigger than the other two and much more aggressive when it comes to demanding food from its parents. 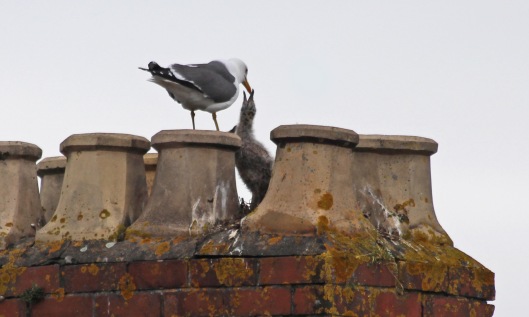 I was a little worried that all the recent rain might have caused them problems as the parents seem to leave them on their own a lot but they all look reasonably healthy so far (they’re at least two weeks old now).

It must take a lot of effort from the parents to keep their hunger satisfied – if it ever is. I spotted one of the parents with a long bit of fish – young eel? – hanging out of its mouth the other day. I bet that soon got gobbled up when it was later regurgitated. Another progress report soon!

While I’ve been away in Kent, the Lesser black-backed gulls that are nesting on a rooftop behind my flat have been busy and one of them is now sitting continuously on the nest, which I assume means they have eggs.

I’ve just been reading that their average clutch is 3-4 eggs, and both female and male take turns at sitting on the nest. The incubation period takes around 30 days so, if the eggs are viable and they continue with their parental duties, we should expect to sit some chicks poking their heads up in early June. Fingers crossed!

So this is what all yesterday’s gull screeching was about!
Mr Lesser black-backed gull was letting the neighbourhood know he had arrived and this was his territory so look out any other gull couples who thought they’d try to muscle in. And today Mr LBB and his mate were getting down to the serious business of nest building amongst the chimney pots across the back lane from my flat – or, at least, Ms LBB was – he just stood watching her do all the work. I do hope the nest goes ahead – what a thrill it would be to watch from my bedroom window as they raise their chicks!