Shrikes are known as butcher birds, perhaps because of their powerful hooked beaks, more likely because of their tendency to create larders by impaling excess prey on spikes in trees and bushes. I have previously seen a distant Great grey shrike but last Sunday I had the opportunity to watch my very first Red-backed shrike at fairly close quarters, and what a stunning bird it is! 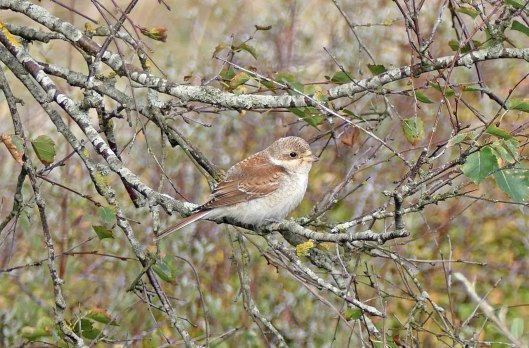 The Red-backed shrike (Lanius collurio) was once a reasonably common bird in southern England but, like so many British birds that have suffered from habitat decline, it is now classified as red-listed. And, though it’s thought one or two pairs still breed in England each year, these birds are mostly seen on passage, migrating to their northern breeding grounds in May-June, then heading to their over-wintering grounds in southern Africa between August and October.

When I was reading up about these birds, I discovered a 2018 article on the Bird Guides website, reporting on the altitudes reached by migrating birds, which noted that, from Sweden (one of the countries where these birds breed), the Red-backed shrike ‘flies at up to 3,650 metres. Both individuals [the other bird was the Great reed warbler] flew the highest above ground across the Mediterranean Sea and the Sahara, but the shrike also reached high flight altitudes closer to its winter grounds in southern Africa.’ It seems incredible to me that the small bird I saw sitting in a tree amongst the sand dunes at Kenfig National Nature Reserve would soon be flying up to 3 kilometres high in the sky over southern Africa!