Today’s and tomorrow’s galls are not on the gall-beleaguered Oak tree and, for a change, they are not caused by wasps, as so many galls seem to be. These two galls are caused by tiny members of the enormous order of flies, the Diptera.

Today’s is Iteomyia capraea (sometimes known as Cecidomyia salicis-folii) (Cecidomyiidae is the family name for gall midges or gall flies). I think I would need better specs to actually see the midge that laid its eggs on this Goat willow (Salix caprea) leaf as it’s only 2-3mm long. Indeed, the galls themselves were pretty small (5-8mm), as you can see from the leafy picture below. When they hatch, the larvae of the midge feed within the leaf tissue causing the willow to develop a gall, sometimes on the midrib of the leaf, sometimes on a thick side vein. I’ve read one report that the larvae are white, another that they are an orange-red colour but I didn’t open up any of the galls for a look at the larva inside so I can’t confirm either report. 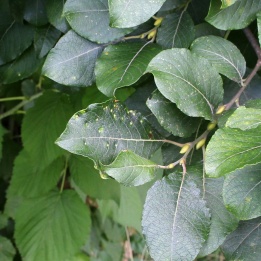 I’ve not been able to discover much about Iteomyia capraea. There are only 215 records showing in the NBN (National Biodiversity Network) database for the whole of Britain, 45 of which are in Wales, but I think that is more a reflection on the under-recording of galls that the rarity of the midge itself. Apparently, the species only breeds a single generation per year and they hibernate over winter in the soil underneath their host tree.