Searching for leafmines on thistles is not for the faint-hearted, writes she with multi-punctured fingers. But it has been worth every drop of blood to find these mines (and I must be a masochist, as, having found them in one place, I then went determinedly searching in other locations – two successes so far, which I’m rather pleased about as there are very few records in south Wales).

The larvae of the moth Coleophora peribenanderi, also known as the Pale Thistle case-bearer (you can see the adult on UK Moths here), builds itself a tube-like case to live in and ventures out of said case to munch happily on the leaves of whichever species of thistle its mother laid her eggs on (in the three I’ve found so far, Creeping thistle). The marks this feeding makes on the plant’s leaves are quite distinctive but, to clinch the identification, you need to look under the leaf and find the case. 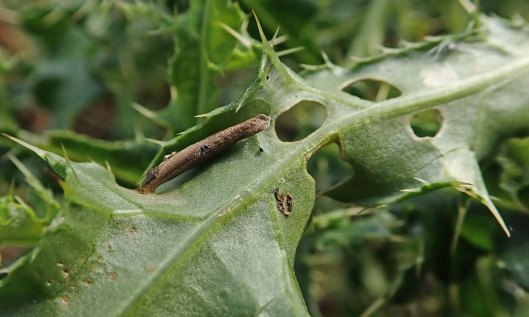 Interestingly, the larva feeds up for a couple of months, from July to September, then suspends its development (the scientific word is diapause, a new one for me) through the winter until either feeding up a bit more in April or passing straight to pupation in May. Fascinating stuff!

A celebration of seed heads, plant life of the future . . .

This was @wildflower_hour’s tweet announcing this week’s #WildflowerHour challenge:

Samaras, siliques, nuts, drupes, berries, hips and capsules, how many different types of wild fruit can you find? That’s the challenge this week for #WildflowerHour. Share your pics this Sunday 8-9pm using the hashtag #fruits.

I’m saving my samaras, siliques, nuts and capsules for another day but here are my drupes, berries and hips: an assortment of Black bryony, Bramble, Buckthorn, Crab apple, Dewberry, Red-osier dogwood (with vivid red stems and white fruit) and Common dogwood, Guelder rose, Hawthorn, the hips of Japanese rose (these grow wild at the local country park) and Dog-rose, Sloe, Whitebeam, Woody nightshade and Yew.

Back on 18 August, I noticed Rob Edmunds’ post on Twitter about his find of Liriomyza pisivora mines on the Everlasting pea in his garden, which led me to check, the next day, the plants growing at Cardiff’s Grangemoor Park. I found plenty of leafmines but my finds were inconclusive – there are several species that form similar mines so I needed to get better photos, if possible transparent images that showed the frass distribution in the mines. 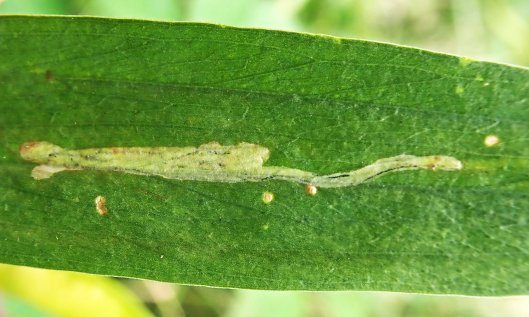 So, when I visited Grangemoor again on 28 August to look for the Wasp spiders that had been reported the previous day, I also took the opportunity to look again at the Everlasting pea plants and took several more photographs. From them, I could see that in some of the mines the frass had been deposited as thin lines alternating from one side of gallery to the other. 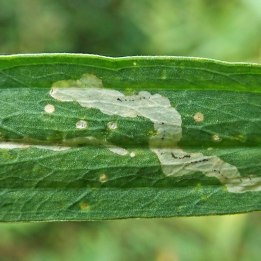 Those images were good enough for Barry Warrington, the national recorder of the Agromyzidae family of flies, to confirm that I had indeed found Liriomyza pisivora and, a splendid surprise, that this was the first ever record of these flies in Wales! 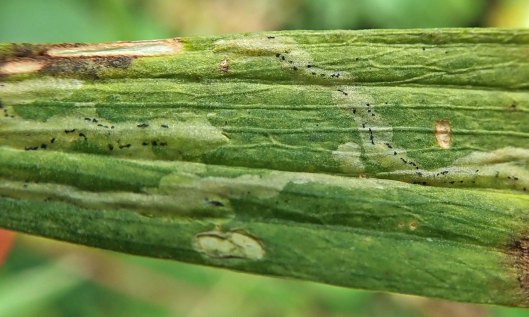 The host plant in this instance, Broad-leaved everlasting-pea (Lathyrus latifolius), is a relatively recent arrival at Grangemoor, though it is now sprawling abundantly over bramble bushes and along scrubby hedgerows in several parts of the park. So far, I’ve only found Liriomyza pisivora mines in one relatively small area but, perhaps, in time, they will spread throughout the park.

This is a new plant for me, an odd one to find growing at the edge of a local lane that’s only used for pedestrian, cycle and horse traffic, at some distance from houses and gardens. Perhaps it’s a result of a seed dropped from a walker’s shoe or a bird dropping. 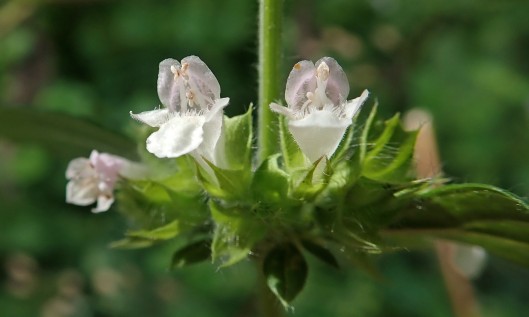 This is Balm (Melissa officinalis), also known as Lemon balm, a native plant of the Mediterranean and most often found in Britain as a garden plant, though also sometimes naturalised in nearby waste ground. 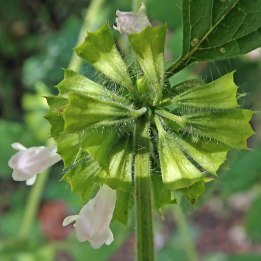 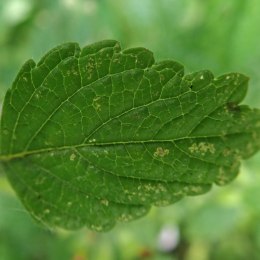 From the shape of the leaves I originally thought it some kind of mint, though the white flowers didn’t fit with that possibility. A rub of the foliage between my fingers provided an aromatic clue, as the leaves are often used in herbal teas and remedies.

I thought about harvesting a few leaves to try but this particular Balm is low growing and sprawling along the lane edge, and the sight of a dog peeing just a little ahead of where this plant is growing put me off the idea.

I’ve been resisting taking berry photos, trying to deny the fact that the days are shortening and the summer heat slowly fading, but I have been watching the Wayfaring trees I featured earlier this year, in the post The Wayfarer, and I couldn’t resist documenting how the glorious flowers from May have gradually been developing into luscious shiny red berries. 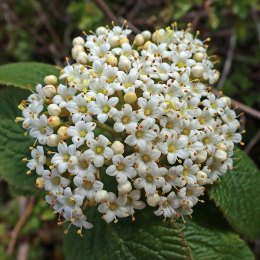 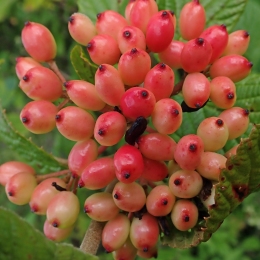 Carline thistles may look dry and unappetising but, as you can see from the enthusiastic feeding of this Buff-tailed bumblebee, they are in fact nectar rich, and favourites not only of bees but also of many species of butterflies.

I’ve been watching these Broad-leaved helleborines since I first noticed their flower stems emerging through the grasses and wildflowers in a local park in early June. 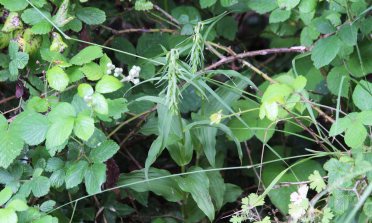 They are plentiful and lush this year – presumably the very wet spring encouraged their growth but, unfortunately, our week-long heat wave has caused many to shrivel and dry before opening fully. Still, I find their flowers rather beautiful. 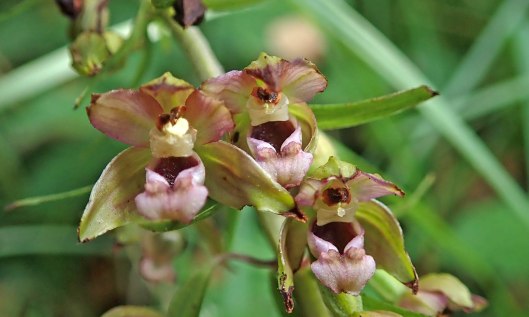 Another day, another leafmine on Teasel. This is not what I’d planned to blog about today but, by sheer coincidence, I discovered this new-to-me leafmine during yesterday’s walk so thought I’d share. And, in fact, once I had the national expert check my identification, he also confirmed that this is the first record of these mines in south Wales.

The larvae of the tiny fly Chromatomyia ramosa are responsible for these mines, feeding both on Teasel and on the various Scabious plant species. As you can see in my photos, the larvae feed along the midrib of the leaf and also in short galleries leading off from the midrib. Though under-recorded, this fly is thought to be widespread in Britain, so I’ll certainly be on the look out for more of its leafmines.

I wasn’t aware of any leafmines on Teasel until I saw a post on Twitter on 23 June by @leafminerman Rob Edmunds. Since then, I’ve been checking the newly sprouted leaves of Teasel whenever I see them. And, finally, on Friday I spotted some mines on a small group of Teasel plants at Cosmeston Lakes Country Park. 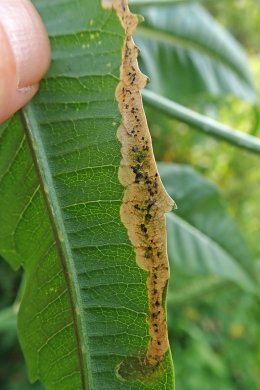 These are the mines of the fly Agromyza dipsaci, another tiny creature I’ll probably never see but I know it’s around from seeing its larval home. The mines appear in early summer once the Teasel leaves start growing, the blotch usually starting at the edge of the leaf and broadening as the larva consumes more and grows. Its large grains of frass can often be seen inside the mine, as shown in the photo on the right above.

The British leafminers website reports that this is an uncommon miner in the UK so I thought I’d check the records. Sure enough, there are only four Welsh records showing in Aderyn, the country’s biodiversity database – five when my record is included, and only seventeen records (including the four Welsh ones) on the NBN Atlas, the British database. It may be, though, that like many invertebrate species, this little fly is under-recorded. So, if you spot these mines on Teasel near you, please make sure to record your sightings.