Birds have some odd ideas about what constitutes their des res. Last year’s winner in the weirdest places to nest stakes was the Blue tit pair who’d chosen to raise their brood in a cigarette disposal unit on the wall of a public toilet block.

So far this year, the leading contenders are the Coal tits whose cheerily cheeping young are huddled cosily into an air ventilation duct underneath a local church.

Oh, and I will just add that the combination of feathers – me mostly looking upwards – and fungi – eyes down – can be quite difficult. By the end of the day, I felt like one of those nodding dog ornaments you used to see in the rear windows of cars. Still, ’twas a lovely long meandering walk! 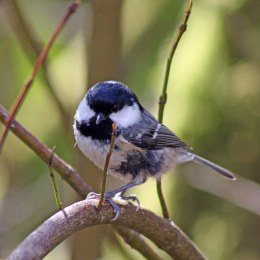 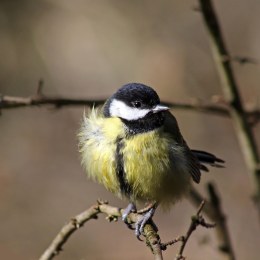 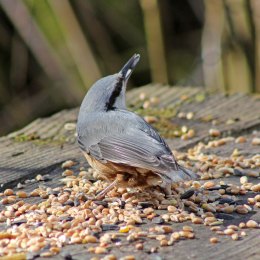 7 January Gale-force winds were blasting across the exposed areas around the lake today but, with blue skies overhead, the park was full of people out walking, despite the chill. The wee birds were hungry and I was greeted with much happy peeping wherever I scattered seed and virtually mobbed at the dragon tree in Cogan Woods, by Great, Blue, Coal and Long-tailed tits, Dunnocks and Robins, Chaffinches and Nuthatches, Blackbirds and a Reed bunting were all happy to accept any tasty little morsels. 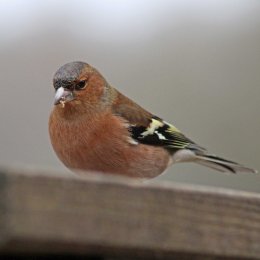 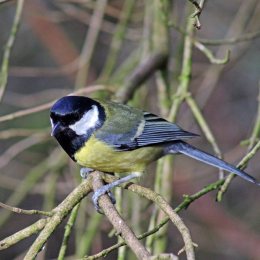 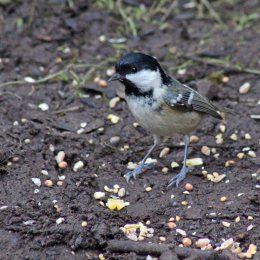 On the lakes the birds were mostly hunkered down, as it was too windy for flying. Teal, Gadwall, Pochard and a Shoveler were some of the highlights. 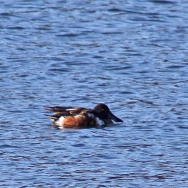 17 January After much scrutinising of the huge numbers of gulls that you nearly always find at Cosmeston, I spotted my first Common gull of the year.

23 January A regular Cosmeston-going birding friend had reported an adult Yellow-legged gull the previous day and I fancied a good walk so I headed to Cossie for a look. These was no sign of the gull but I was delighted to see one of the Marsh tits that frequents a particular spot in Cogan Woods, and it became bird number 67 on this year’s list, before I strode quickly home in pouring rain (yep, drenched!). 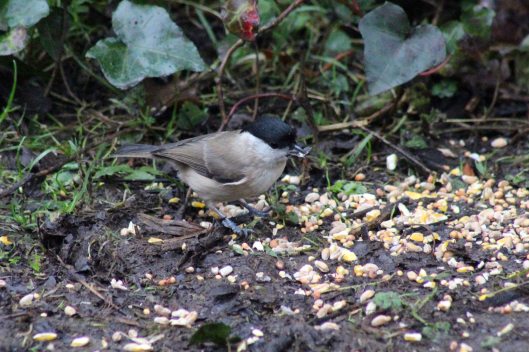 I’ve been to Cosmeston a couple more times this month but those outings were more about braving the rain  to satisfy my cravings for fresh air and exercise than nature-watching, particularly as it’s been too wet to have camera and binoculars out and about. Let’s hope February is a bit drier.

I love all Britain’s tits: they’re almost all tiny and very sweet, often cheeky, always entertaining, occasionally rather tame, and frequently friendly. Though less colourful than its cousins the Great and Blue, I think the Coal tit (Periparus ater) is a very handsome bird. It tends to be more timid than its cousins as well, but will feed from garden peanut feeders and often joins its fellow tits in large flocks that move together through gardens, parks and areas of woodland looking for the seeds and insects they like to eat. 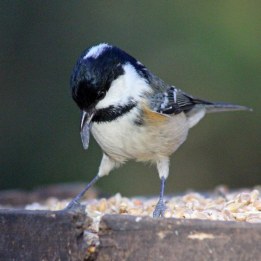 I was very lucky earlier this year to be alerted by my fellow members of the Glamorgan Bird Club to the presence of a pair of Marsh tits (Poecile palustris) in the woodland of a local country park. These birds look very similar to Coal tits (and, apparently, also to Willow tits, which I have not yet seen) but can easily be told apart by a look at the tops of their heads. The Coal tit (above left) has a white cap on top of its head, whereas the Marsh tit (above right) does not. 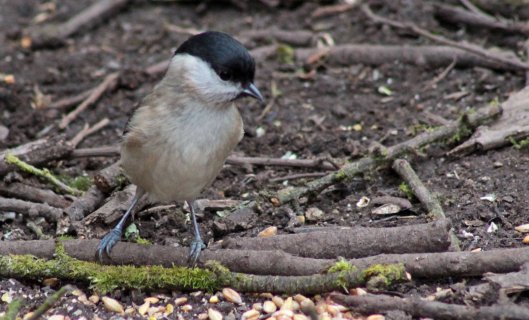 I was particularly delighted to see the Marsh tits as, sadly, their population has undergone a dramatic decline of at least 50% in the past 25 years so they are now considered globally threatened and have been added to the Red List of endangered creatures. Although they can be found throughout England and Wales, they are more often seen in the southern parts of both countries. They will feed from garden bird feeders so, if you live in the south and have the space for a feeder, do please help out these little birds with regular supplies of seeds and nuts.

When deciding on a title for this post, I couldn’t help but wonder where the phrase ‘Watch the birdie’ originated, and I quickly discovered that as early as 1879 Victorian portrait photographers were using trained live birds and then mechanical chirping birds to hold the attention of their subjects. (This blog has more details if you’re interested.) My intentions were a little different: I was carrying small pottles of bird seed to try to hold the birdies’ attention so I could take their photographs! However, plenty of folk had beaten me to it and the birds were already scoffing into all their food presents. 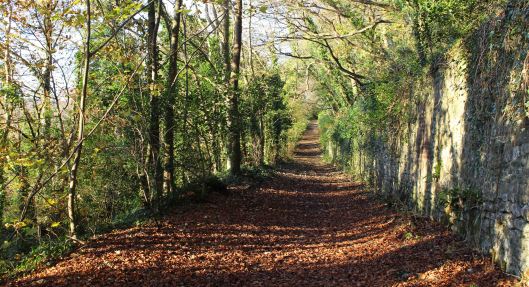 I hadn’t been to Forest Farm for a month or two so it was lovely to wander along the towpath of the old Glamorgan Canal and the meandering woodland paths, listening to bird song all around. A highlight was watching a kingfisher trying to spot the sprats in the canal – I only saw it dive once and that was unsuccessful but it was still an absolute delight to watch. It was a truly wonderful day watching the very-much-alive birdies. 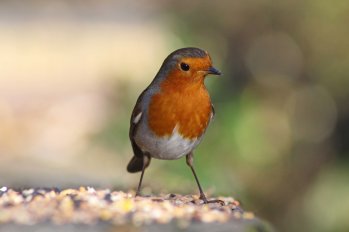