When the birds disappear behind the leaves of the trees during the summer months, my eye turns to the other creatures that delight and amaze with their aerial displays, and the dragonflies are some of the most impressive. In recent weeks I’ve seen my first Skimmers. 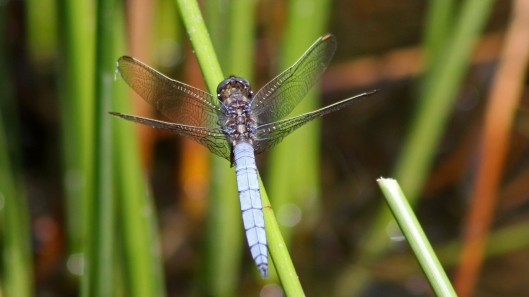 Keeled skimmer (Orthetrum coerulescens)
I was on a walk with my bird club buddies in the hills above Swansea this week when I saw my first Keeled skimmer. It was flitting back and forth quite restlessly in a boggy reed-filled area, perching on the reeds and other vegetation but only for short periods, so I was lucky to get some reasonable photos. I love the brilliant blue colour, called pruinescence, which is actually a covering of wax particles and which can be rubbed off during mating or if the dragonfly accidentally rubs against vegetation. Keeled skimmers are mostly found in western Britain and fly from June through to September. 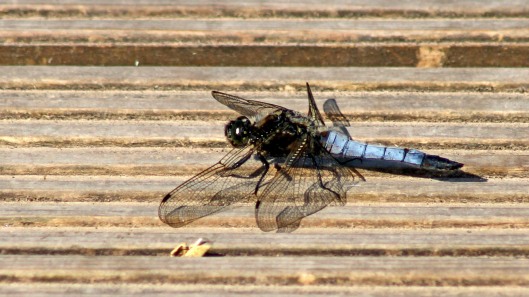 Black-tailed skimmer (Orthetrum cancellatum)
Though very similar in appearance to the Keeled skimmer, the Black-tailed skimmer has, as its name implies, a darker end to its abdomen, and it’s much more common, as it’s happy to live around any pond, lake or stream, rather than the acidic moorland that the Keeled skimmer prefers. Though it is more common in southern parts of Britain, it has gradually been extending its range northwards, and its flight period is a little longer than its keeled cousin, being on the wing sometimes as early as late April right through to October if conditions are mild enough.