Now that Spring has sprung, the folks who run #WildflowerHour on social media are issuing weekly challenges for followers to focus their searches around. This week it was #PavementPlants, searching for any plants in bloom that were growing in the cracks or along the edges of their local pavements. Challenges like this do mean you get some odd looks from people when you’re photographing your finds but I’m very used to that these days.

Here’s what I found: Coltsfoot (I love how tenacious these plants are – they were pushing up between the cracks in an old set of steps connecting two local streets); Common cornsalad; Daisy; Dandelion; Herb Robert; Lesser celandine; Primrose; Red dead-nettle; and Shepherd’s-purse.

This week’s Wildflower Hour challenge was to check out your local pavement for #PavementPlants. As the challenge says: ‘It is amazing how many plants are able to eke out a living where they were never invited. Growing in seemingly inhospitable cracks and crevices, thriving where there is little soil, these tough little plants are often overlooked.’ So, it was eyes down this week as I wandered around Penarth and, though I decided to look just for plants that were flowering and ignore the ubiquitous grasses and mosses, I did manage to find a few little treasures in my local pavements, steps and paths.

Groundsel (Senecio vulgaris)
I’m sure most people recognise Groundsel when they see it, as it’s very common in areas of disturbed ground. I just learned today that Senecio comes from the Latin for ‘old man’, a reference to the bare ‘scalp’ that remains once the plant’s fluffy white seeds have blown away.

Hairy bittercress (Cardamine hirsuta)
I was initially confused about which bittercress this was, Hairy or Wavy but my trusty wildflower guide tells me that Hairy has four stamens and Wavy usually has six, so that clinched it. Apparently, this plant is edible, though bitter – hence its name: I think I’ll pass. 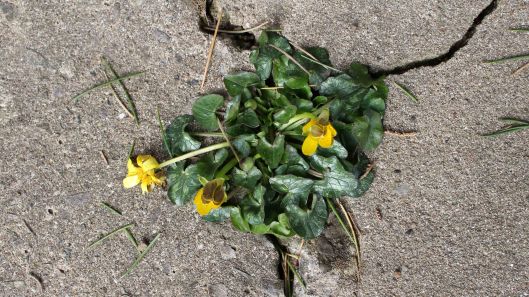 Lesser celandine (Ficaria verna)
Once known as Pilewort, as it was believed to be a remedy for haemorrhoids, Lesser celandine contains high levels of vitamin C and was also used to prevent scurvy.