According to Flora Britannica, this plant is ‘one of the favourite food-plants of the little insects known as froghoppers, notable for surrounding themselves with protective froth whilst feeding. John Gerard … called it “Spatling Poppie”, “in respect of that kindle of frothie spittle, or spume, which we call Cuckoo spittle, that more aboundeth in the bosomes of the leaues of these plants, then in any other”.’

Gerard’s ‘Spatling Poppie’ is today better known as Bladder campion (Silene vulgaris), and I think it’s fairly obvious where the name ‘bladder’ came from – the calyx of the flower head looks swollen, as if inflated with air or water. According to the Plantlife website, the plant’s other common names include Cowbell, Maiden’s tears, and Common Bladder Catchfly ‘even though it doesn’t technically catch flies’. 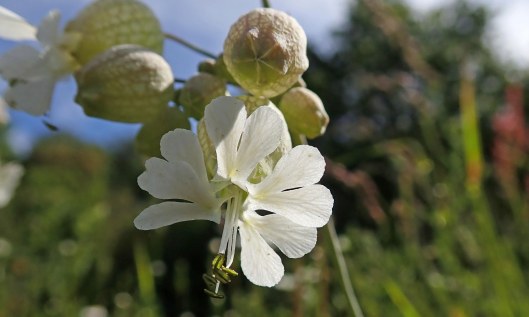 This is not a flower I see often locally, so I was delighted to find several clumps growing amongst wildflowers at the edge of a local road. A roadside verge is a typical location for Bladder campion, and these lovely wildflowers can also be found under hedgerows, in fields and meadows.