This lovely blast of botannical sunshine I found flowering on the clifftops at Lavernock is Rock samphire (Crithmum maritimum).

I’ve never eaten it – apart from the occasional blackberry at this time of year, I’m not a forager – I like to leave things to be appreciated by everyone and eaten by the wildlife that needs it more than me (anti-foraging mini-rant over!) – but I believe it can be eaten as a vegetable and is also used in pickling. 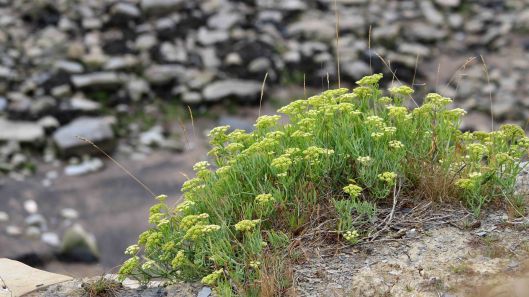 In fact, according to the Oxford Dictionary, the word samphire was once sampiere, from the French (herbe de) Saint Pierre or ‘St Peter(‘s herb)’. And in my trusty Flora Britannica, Richard Mabey writes

In the nineteenth century rock samphire from Dover and the Isle of Wight was sent in casks of brine to London, where wholesalers would pay up to four shillings a bushel for it. Shakespeare knew the plant from the south coast, and in King Lear, in a scene near Dover, has Edgar say to Gloucester, ‘half way down / Hangs one that gathers samphire, dreadful trade!’

Even if I did want to try this particular Rock samphire, its location is completely inaccessible to all but the most foolhardy. But one huge bonus of photographing a plant that grows along cliff edges is that sometimes, if you’re really lucky, a cute and curious little Rock pipit will pop up to see what’s happening. 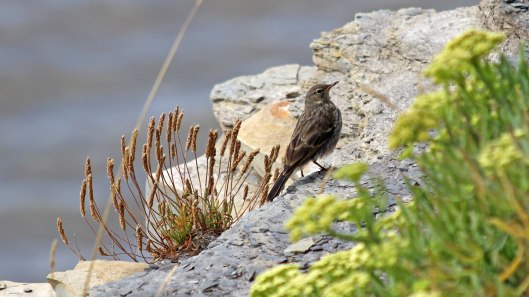 2 thoughts on “Rocking the samphire”