Bright red in the landscape always draws my eye (witness Wednesday’s beetles), so this burst of vibrant colour on a low-growing rose bush immediately attracted me. And the fact that the rose was ‘persuaded’ to create this object by the larvae of a tiny wasp is really quite mind-blowing. That wasp is a Bedeguar gall wasp (Diplolepis rosae), and you may remember my somewhat haphazard but ultimately successful attempts to see one of these wasps when I kept a gall in a jar to see what emerged (Bedeguar gall wasp, May 2020). This time I’m restricting myself to admiring the wasp’s astonishing creation. 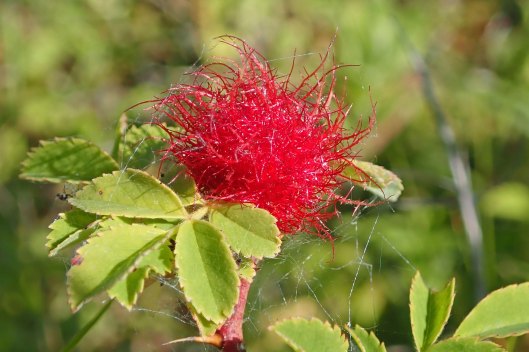 This is a tale of two galls. One gall (below, left) was created by the Thistle gall fly (Urophora cardui), the other (below, right) by the Bedeguar gall wasp (Diplolepis rosae). I harvested the first gall late last year, the second early this year and, when I brought that second gall home, I made a rookie error – I put it in the same jar as the first gall. Why was that an error? Because it meant that if/when anything emerged from the galls, I wouldn’t know which gall it came from. 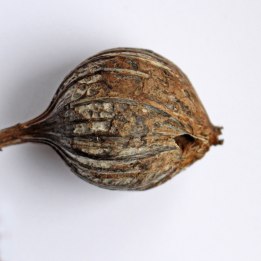 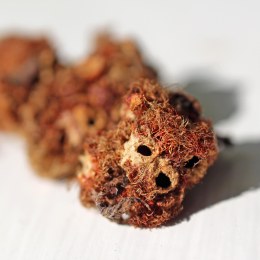 A few weeks ago, in late April, creatures began emerging from one or other or both of the galls. At the time, because I found an empty pupa case poking out of a hole in the Thistle gall, I assumed the creatures had emerged from it – I wrote about that in What’s in a gall?, April 2020. It turns out I was wrong. 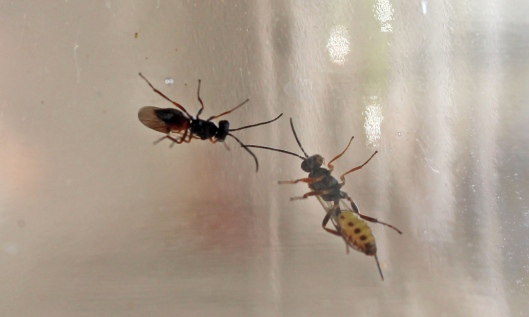 After writing that piece, I decided to place the galls in two separate jars and, as I wrote in a post last week, two different wasp species have subsequently emerged from the Bedeguar gall wasp’s gall, the gall causer itself (Diplolepis rosae) (above, left) and a second wasp (above, right), which turns out to be the same species of wasp I wrote about in April and which, at the time, I thought had emerged from the Thistle gall fly’s gall. 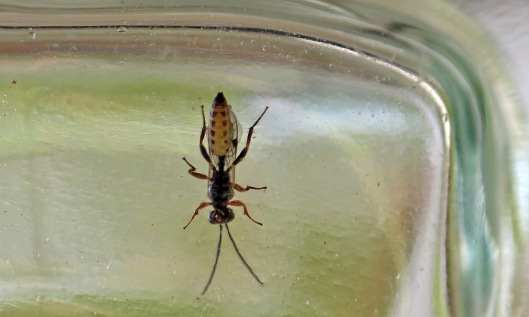 The empty pupa case is now a mystery but the second wasp’s identity has been confirmed as Orthopelma mediator, a parasite of the Bedeguar gall wasp. So, adding to the initial three that emerged, a total of four of these wasps have now hatched from that gall. Amazingly, there is only one previous record, from 1933, for this wasp in the Welsh records database but I don’t think that’s because it’s a rare find; it’s just that no one bothers to keep the galls to see what emerges from them and thus the wasp is under-recorded. 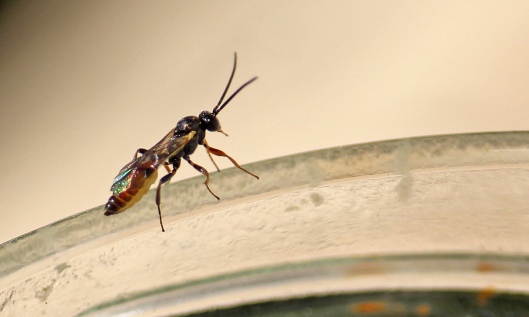 So, I hope I have convinced you that this is a fascinating process which you might also like to try but do remember the moral of this tale of two galls: if you decide to bring home galls to see what might hatch out, make sure you put each and every gall in a separate jar!

You might remember that, a few months ago, I posted about the (supposedly) empty galls of the Bedeguar gall wasp I’d found during a wet walk at Cosmeston Lakes Country Park (Empty pincushions, January 2020). A week or so after writing that post, I was back at Cosmeston and remembered to harvest one of the galls, which has ever since been sitting in a sealed jar on my kitchen windowsill. 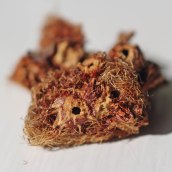 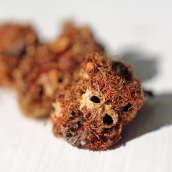 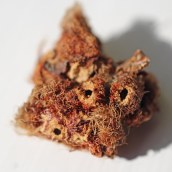 Although the many holes in the gall made me think that all of its inhabitants had already hatched, I decided to wait and see if anything else appeared. Two days ago I noticed movement in the jar and, taking a closer look, found two different species of wasp had emerged. 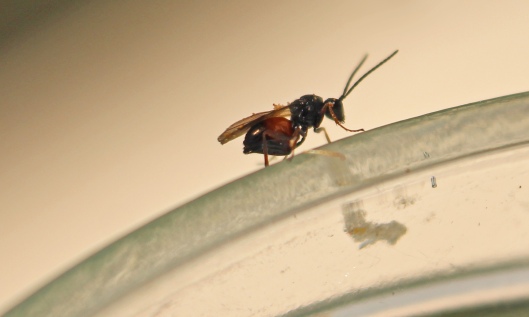 This is one of them, and I’m 99% certain this is the gall causer itself, the Bedeguar gall wasp, Diplolepis rosae, the offspring of the wasp that caused the gall to form in the first place. These wasps are so tiny – just 3-4 mm long – that most of us don’t usually see them so I was very pleased to have this one emerge from its gall. 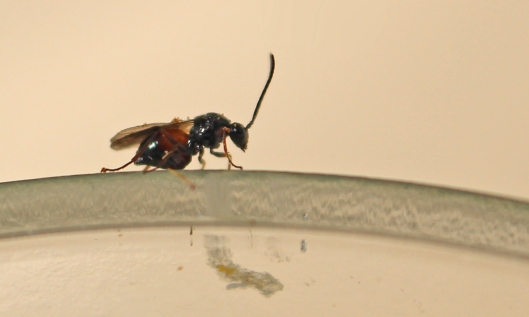 There is a bit of a story attached to the second wasp that emerged, and I am currently awaiting confirmation of its identity. As soon as I know more, I’ll write it up in a further post.

Robin’s pincushions are the amazing gall structures created on Dog roses by the larvae of Diplolepis rosae, the Bedeguar gall wasp. 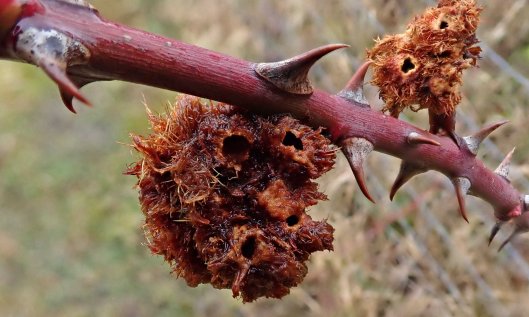 I’ve seen the bright red galls many times during the summer months but I’ve not looked for them in the winter, so it was interesting today to find these and to see the very obvious holes where the adult wasps have hatched out. If it hadn’t been raining, I would have broken one off and brought it home for a closer look inside … maybe next week. 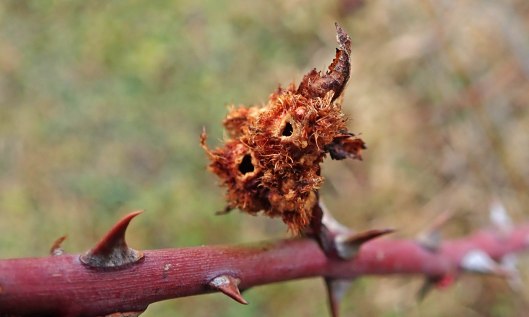 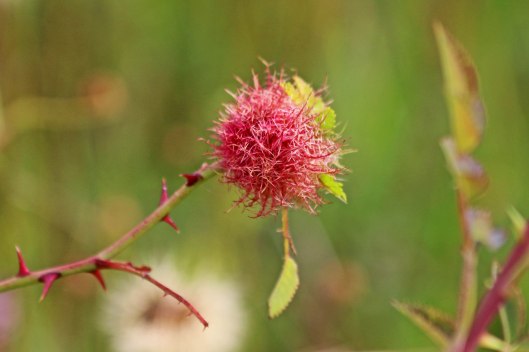 Commonly known as Robin’s pincushion and found growing on Dog roses, this is a gall, the spectacular creation of a group of larvae of the Bedeguar gall wasp (Diplolepis rosae).