Woot! This teeny tiny beastie is my first weevil of 2022, as you can probably guess from the yellow flower it’s sitting on, a Gorse weevil (Exapion ulicis). I’ve read that they usually feed by poking their snout (properly known as a rostrum) into gorse stems and seeds but this one had its snout so firmly inserted into the flower that it looked like it would almost tip over. 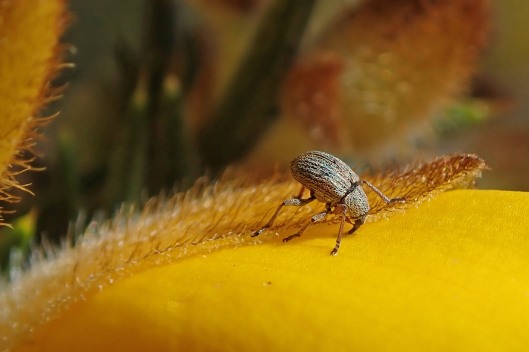 Slowly, slowly, more insects are emerging. When I was getting a Gorse photo for last Sunday’s yellow wildflower challenge, this teeny tiny Gorse weevil (Exapion ulicis) paid a visit. I’m not sure if it was getting salt from my hand as it seemed quite reluctant to leave.

And yesterday I was scanning a Buddleja for leaf mines when I had the feeling I was being watched. This Common green shieldbug (Palomena prasina) was very well camouflaged sitting perfectly still on its leaf. 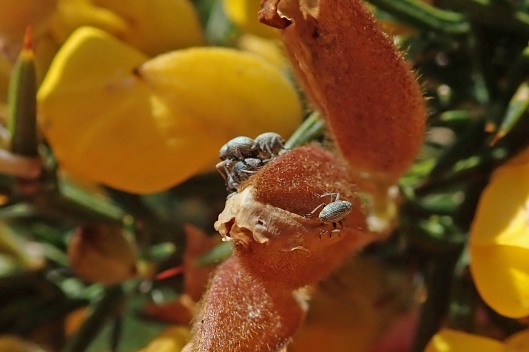 I got some strange looks today when I was out walking – nothing unusual about that really. This time it was because I had my nose in a gorse bush looking for its special critters – and I found them. First, I was delighted to spot two tiny Gorse weevils (Exapion ulicis). I’ve only found them once before and these two led me a merry dance, in and around the gorse leaves, not wanting to have their photo taken. One disappeared but I managed to grab a couple of pics of the other. 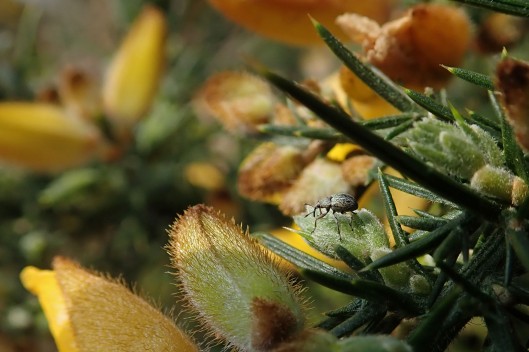 The other critters were much easier, at least ten of them, probably many more, hiding in plain sight – that’s how well camouflaged they are. These Gorse shieldbugs (Piezodorus lituratus) were also camera shy and the gorse thorns made a few holes in my hands as I tried to pull the gorse this way and that to get some photos. But it was worth every speck of blood! 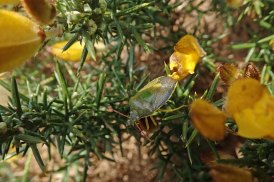 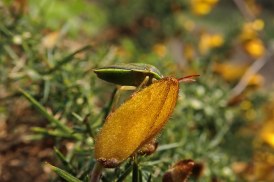 It was lunchtime on our Glamorgan botany group walk and, rather than get a wet bum from sitting on the damp grass, I was eating my roll and cheese while poking around the flowers of a nearby gorse bush. I was looking for Gorse shieldbugs, of which I found not a sign, but I did find this tiny creature and, after a bit more poking, a couple of its friends.

It’s a Gorse weevil (Exapion ulicis) and, as you can judge from its size relative to my finger, it’s tiny, only 2 to 3mm long. Its snout is (relatively) enormous, about half as long as its body, making it look like a cross between an elephant (without the ears) and a spider (those legs!). And that snout is its secret weapon – the weevil uses its snout to burrow into the stem and spines of the gorse bush to eat the soft tissue inside. 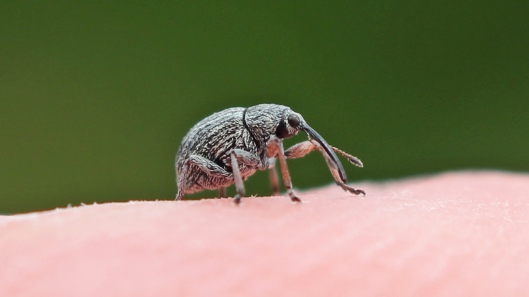 Apparently this little weevil was introduced to my homeland, New Zealand, back in 1931 in an effort to control the introduced (by British migrants as cheap hedging) gorse bushes that were thriving in New Zealand’s favourable climate. The weevil’s larvae live inside and eat gorse seeds, thus preventing the bushes from reproducing. The little gorse weevil has done its job well but it seems the scientists hadn’t banked on the fact that the weevil larvae only eat gorse seeds in the springtime and the gorse also flowers and seeds in the autumn. 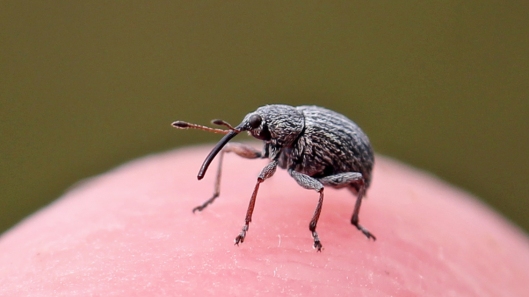