I thought for this week’s Sunday wildflower post, I’d take you on a walk through parts of my local woodlands to show you some of the gorgeous plants a’blooming there at the moment. There are other wildflowers too, of course – Primroses, Violets, Dog’s-mercury, etc – but my video features Wild garlic, Opposite-leaved golden saxifrage, Wood anemone, Herb-paris, Lesser celandine, Moschatel and Bluebells.

During my weekly walks in local ancient woodland, I’ve been monitoring the development of this plant, watching it arise from the damp soil, waiting for its leaves to grow and its flower to emerge … and yesterday the first of the blooms were finally open.

This is Herb-paris (Paris quadrifolia), and I think you can see the reason I have been so keen to see these stunning flowers again.

Their structure is remarkable, a combination that Richard Mabey describes thus in Flora Britannica: ‘a star of four very narrow yellow-green petals and four wider sepals, topped by a crown of eight golden stamens, and later a single shining black berry – the “devil-in-the-bush” that was one of the plant’s obsolete names’.

The plants are looking particularly abundant this year and many flowers have yet to open so I will definitely be returning to feast my eyes on these beauties many times before they disappear for another year.

Paris quadrifolia is its scientific name and you’d think quadrifolia would mean this plant had four leaves but no one told the plant that! Herb-Paris, as it’s more commonly known, can actually have between 4 and 8 leaves. It’s not its leaves that Herb-Paris is most admired for though, it’s its stunning solitary flower, a true masterpiece of Nature.

Herb-Paris is a perennial plant and can be found in both cool and temperate areas of Europe. In Britain you’re most likely to find it in the damp shade of ancient woodlands on calcareous soils, though sadly it has declined significantly over the last century due to the destruction of many broad-leaved woodlands in favour of conifer plantations. As Herb-Paris has proven to be very slow at colonising replanted woodlands, the only hope for its survival is the conservation of those ancient woodlands that still exist. 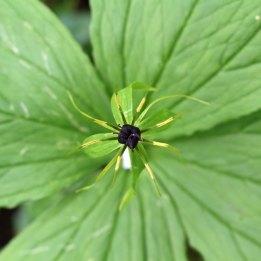 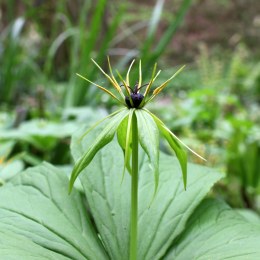 Though all parts of this plant are considered poisonous, it was used in various ways in traditional medicine: it was considered to be an antidote for mercury and arsenic poisoning, its root was used as an emetic, and the juice of its berry as a treatment for inflammation of the eyes. I think I’ll stick to conventional medicine and leave this beautiful herb to be admired by all who are lucky enough to see it.