This is a plug for the much-maligned Nettle, a plant most of us humans quickly learn to recognise in order to avoid its stings, though most wildlife seems well able to avoid them. I’ve read that Nettles support 40 species of insect but I wonder if that number is on the conservative side. Here are a few insects I spotted on them earlier this year: 7-spot ladybird larva, the 1st instar of a Common green shieldbug, Grypocoris stysi, Nettle weevil, the larva of the hoverfly Scaeva pyrastri, and a Speckled bush-cricket nymph. 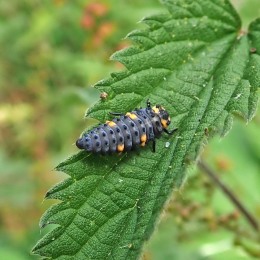 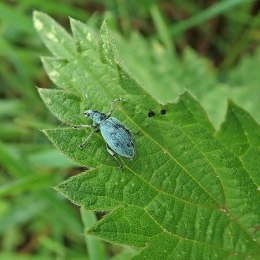 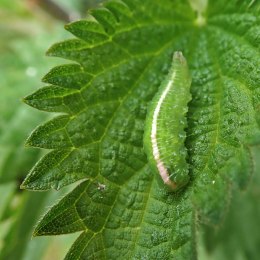 Back in January I posted about the Cobalt crust-finding challenge I was taking part in with my friends from the Glamorgan Fungus Group. This month we’ve been at it again but our challenge species are rusts, specifically Uromyces dactylis (below right) and Uromyces ficaria which are both found on Lesser Celandine; Puccinia urtica (below left) on Nettles; Uromyces muscari (the other four photos) on native, cultivated and hybrid Bluebells; and on Nipplewort Lapsana communis. 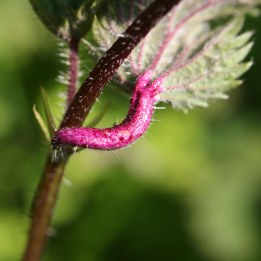 Though finding and photographing the Nettle rust is more for the masochist than the faint-hearted – our group has joked about buying thick rubber gloves up to our elbows(!), the other rusts are less dangerous though no less of a challenge. I’ve had most success with the Bluebell rust – probably a reflection of the fact that everyone loves Bluebells so they’ve been planted almost everywhere, but have found only one specimen of one of the rusts on Lesser Celandine, despite the flowers being very plentiful and numerous in my local parks and wild areas. And I have yet to find a specimen of Nipplewort rust – probably because I have yet to positively identify Nipplewort (this is why I’ve taken up a botany menteeship!). 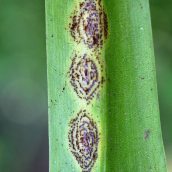 Still, just as we did with Cobalt crust, our group members have thrown themselves into this challenge and, to date, our combined total stands at over 140 separate finds. And, just like last time, our finds are being fed into our local biodiversity database so our challenge is helping to increase the knowledge base for these under-recorded fungi. Citizen science rocks! 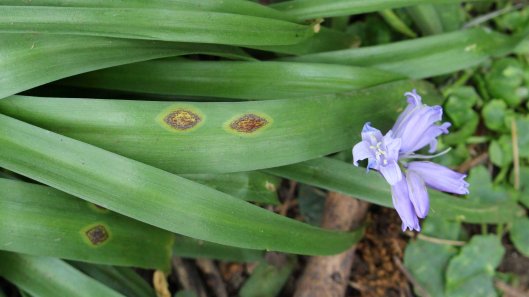